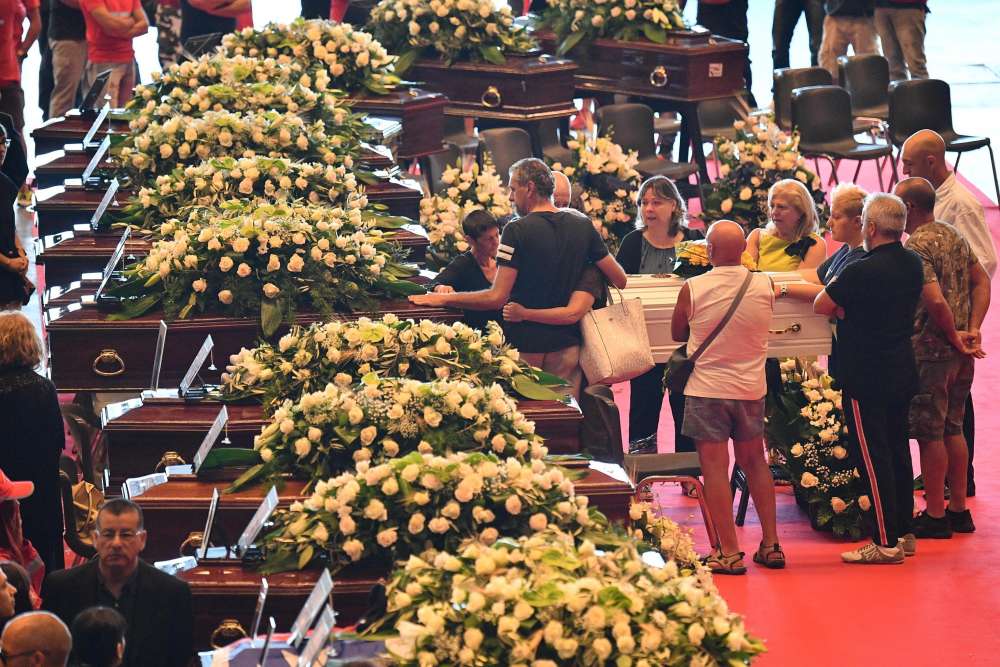 Italian toll-road operator Autostrade per l’Italia pledged on Saturday to rebuild a bridge that collapsed in Genoa this week killing at least 40 people, but its chief executive stopped short of apologising for the disaster.

Autostrade, controlled by infrastructure group Atlantia, manages the section of the A10 motorway linking Genoa to the French border where the 1.1-km-long viaduct gave way in busy lunchtime traffic on Tuesday.

In a news conference in the port city, held only hours after a state funeral for many of the victims, Chief Executive Giovanni Castellucci voiced his deep condolences for the victims’ families but declined to give an unreserved apology.

“Apologies and responsibilities are things that are interconnected. You apologise if you feel you are responsible,” he said, adding that he would wait for official investigators to determine responsibility for the collapse.

Autostrade would set aside around 500 million euros for disaster recovery, including funds for a new bridge and to help bereaved families and people who will have to leave their homes close to the viaduct for the reconstruction, Castellucci said.

He added that, once authorisations were received, it would take eight months for the new bridge to be built, with a “solid and feasible project that will give a prompt answer to the needs of the city”.

The company is under intense fire from Italy’s new anti-establishment government after the disaster, though the transport ministry also has some responsibility for overseeing safety on the country’s privately operated roads.

Castellucci said that the bridge had been “in good health”.

Rome has said Autostrade failed to ensure a safe structure and has begun a legal process with the aim of revoking concessions for Autostrade’s entire Italian toll network, spanning almost 3,000 km.

The blame game over the disaster is playing out even as Italy mourns the victims and rescue workers pressed on with their search for anyone left under the slabs of concrete.

Authorities said one more body had been found and another victim had died in hospital, bringing the known death toll to 40. Three more people who had been travelling in a car which was unearthed from the rubble on Saturday are still officially missing.

Saturday’s mass for 19 of the victims was held at Genoa’s Exhibition and Trade Centre and was led by the city’s archbishop, Cardinal Angelo Bagnasco.

Some of the victims’ families boycotted the event and held their own private services as a protest against the state, accusing it of negligence in overseeing safety on the bridge.

The government has declared Saturday a national day of mourning and declared a state of emergency for Genoa, one of Italy’s largest ports, allocating just over 30 million euros for the city’s immediate needs.

Members of the fire brigade, rescue teams and the police force were welcomed with applause as they entered the exhibition centre, where the caskets, including a small white one for a child, were lined up in front of a temporary altar.

“These things should not happen but unfortunately they still do. Now they’re looking for someone to blame but dead people cannot come back,” said Giuseppe Rondinelli, a friend of one of the victims, who was among the mourners.

Players of the city’s two soccer teams, Genoa and Sampdoria, sat among the crowd, having cancelled matches this weekend in sign of respect. Relatives of the dead stood beside the coffins, adorned with white and yellow roses, some with their hands on the caskets.

Albanian flags were draped over two caskets and the Chilean flag on two others. Another was covered with soccer memorabilia.

“The collapse of the bridge was a gash in the heart of Genoa, it’s a deep wound,” the archbishop said in his homily.

A Genoa court will try to establish exactly why the 51 year-old bridge collapsed, but experts said problems with concrete-encased cable stays were a possible cause.

“Evidently someone did not do their job well in terms of ordinary and extraordinary maintenance. The concessionaire has faults that appear very grave,” Toninelli said in an interview with La Stampa on Saturday , adding that it was up to investigators to establish who was responsible.

The Transport Ministry has given Autostrade 15 days to show it has met all its contractual obligations, failing which Rome could consider it in breach of the terms of its concessions.

Toninelli said he would deploy all necessary resources to avoid further disasters and said he was preparing contingencies in case the concessions were revoked. “The technical situation (of the collapse) is so complex that it is up to the justice system to understand what happened, why and in what conditions,” Castellucci said, pledging full cooperation with authorities in order to grant “fast and deep” investigations.