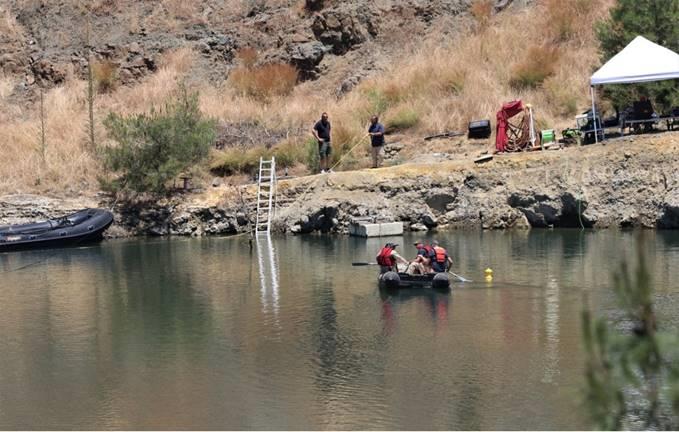 Authorities are considering partly draining Memi lake in Xyliatou where a search is underway for the body of a six year old girl, one of seven victims of a self-confessed serial killer, the Cyprus News Agency reports.

Fire services chief Markos Trangolas, who has been coordinating the search said that partly draining the lake will increase visibility and make the search by boat much easier. He said completely emptying the lake has been ruled out as this would require authorities to wait four to six months for the mud to dry before they can continue their search.

His comments follow a report in Thursday’s Phileleftheros which said that the issue was under consideration after Israeli experts on Wednesday ended their search of the lake without result. The Israeli team has been combing the lake with robotic cameras.

It added that authorities do not envision totalling emptying the lake which currently contains about 2 million cubic metres of water. The crater is 60 metres deep. Trangolas said that no water will be removed without approval from the competent departments. The Geological Survey Department and the Water Development Department have been asked to give their opinion as the water will be pumped into a nearby stream.

The fire chief said that up to a few days ago, water had been flowing into the lake from a stream on the ease side of Memi lake, but now that the flow has stopped it was an opportunity to try and reduce the water levels.

According to Phileleftheros, lowering the water levels in the lake would reveal the area where the self-confessed serial killer has told police he dumped the body of the six year old girl. The army officer told police there was a track at the spot which is currently covered by water.

Trangolas said that there are a lot of bushes, roots, reeds and many other obstacles at the spot pointed out by the suspect and visibility is poor.

A search is also underway at Kokkini Limni near Mitsero for the body of 30 year old woman who the self-confessed killer — who went by the online name of Orestes — said he put in a suitcase and threw in the lake.  The bodies of a mother and daughter, also stuffed into suitcases and weighed down by cement blocks, have already been recovered from Kokkini Limni but search parties using divers, sonar equipment and robotic cameras, have been unable to find the third body.

The suspect, whose custody was renewed for the sixth time by Nicosia district court on Wednesday, has reportedly confessed to killing five women and two children.  Two bodies were recovered from an abandoned mine shaft in Mitsero, another from a dry well in Orounta firing range and two from Kokkini Limni.

Trangolas said that divers will continue their search in Kokkini Limni and needed another 10 days to complete their search.

By In Cyprus
Previous articlePaphos International Film Festival
Next articleGerasa