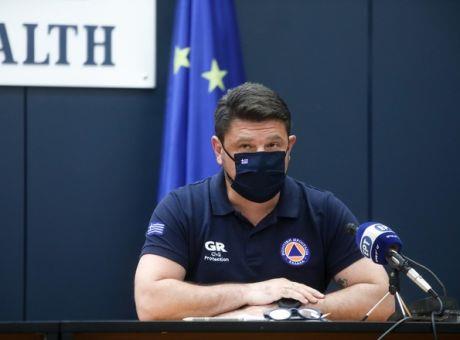 Deputy Civil Protection and Crises Management Minister Nikos Hardalias has announced emergency measures aiming to contain the spread of the coronavirus in Attica.

A daily rate of 3 new confirmed cases per 100,000 residents places Attica in the “orange alert” state, Hardalias said, with a steadily rising incidence. The highest rate of infections are noted in the following three groups: private sector employees (29.07%), retirees (13.43%) and unemployed (13.27%).

He then announced the new measures, as follows:

– Indoor and outdoor gatherings are limited to 9 people, except for areas already regulated, such as restaurants.

– Indoor and outdoor concerts are suspended, as are indoor film screenings.

– Baptisms, weddings and funerals may have a maximum of 20 people in attendance.

– People from vulnerable groups such as migrants who have tested positive to the virus but are asymptomatic will be transferred to hotels and be under medical care there.

– 40% of private and public business employees must work from home.

– Private sector companies must do the same, but at four stages.

– People 65 or older must limit their social outings for 14 days, and their contacts to immediate family members.

Hardalias said that the National Public Health Organisation (EODY) will conduct rapid testing for the virus at schools, public transportation and hospitals.

The public should observe three preventative measures to help the effort to control infections, he said: avoiding public gatherings; use a mask on public transportation; and be more vigilant if they belong to older age groups.