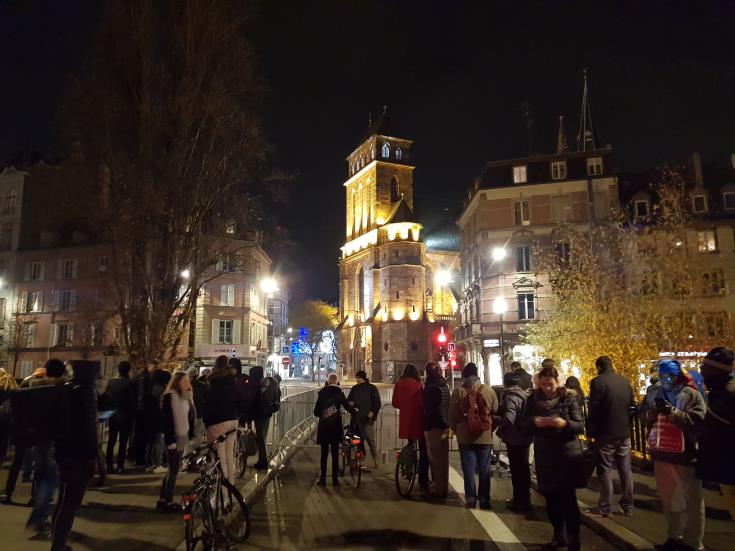 A lone gunman shot dead at least two people and wounded 11 others near a Christmas market in the city of Strasbourg on Tuesday evening before fleeing, police said.

The motive was not immediately clear but, with France still on high alert after a wave of attacks commissioned or inspired by Islamic State militants since early 2015, the counter-terrorism prosecutor opened an investigation.

Interior Minister Christophe Castaner said the gunman was known to security services, and the local prefecture said he had previously been identified as a danger to security.

People in the city’s Neudorf area and Etoile park were told to stay where they were as officers hunted the shooter on the ground and from the air.

“There were gunshots and people running everywhere,” one local shopkeeper told BFM TV. “It lasted about 10 minutes.”

The Christmas market was being held amid tight security this year, with unauthorised vehicles excluded from surrounding streets during opening hours and checkpoints set up on bridges and access points to search pedestrians’ bags.

A source at the prosecutor’s office said the motive for the shooting was not immediately clear.

A Reuters reporter was among 30 to 40 people being held in the basement of a supermarket for their own safety in central Strasbourg, waiting for police to clear the area. Lights were switched off and bottles of water handed out.

President Emmanuel Macron was informed of the shooting and was being updated as events unfurled, an Elysee Palace official said. Castaner was on his way to Strasbourg, which lies on the border with Germany.

A spokesman for the European Parliament said the building had been shut down and staff ordered to stay inside.

“My thoughts are with the victims of the Strasbourg shooting, which I condemn with the utmost firmness,” tweeted Jean-Claude Juncker, head of the European Commission, the EU executive. “Strasbourg is an excellent symbol of peace and European Democracy. Values that we will always defend.”

In 2016, a truck ploughed into a Bastille Day crowd in Nice, killing more than 80 people, while in November 2015, coordinated Islamist militant attacks on the Bataclan concert hall and other sites in Paris claimed about 130 lives. There have also been attacks in Paris on a policeman on the Champs-Elysees avenue, the satirical weekly Charlie Hebdo and a kosher store.

By In Cyprus
Previous articleElderly man missing from home
Next articleTrump says he is not concerned about being impeached, defends payments to women