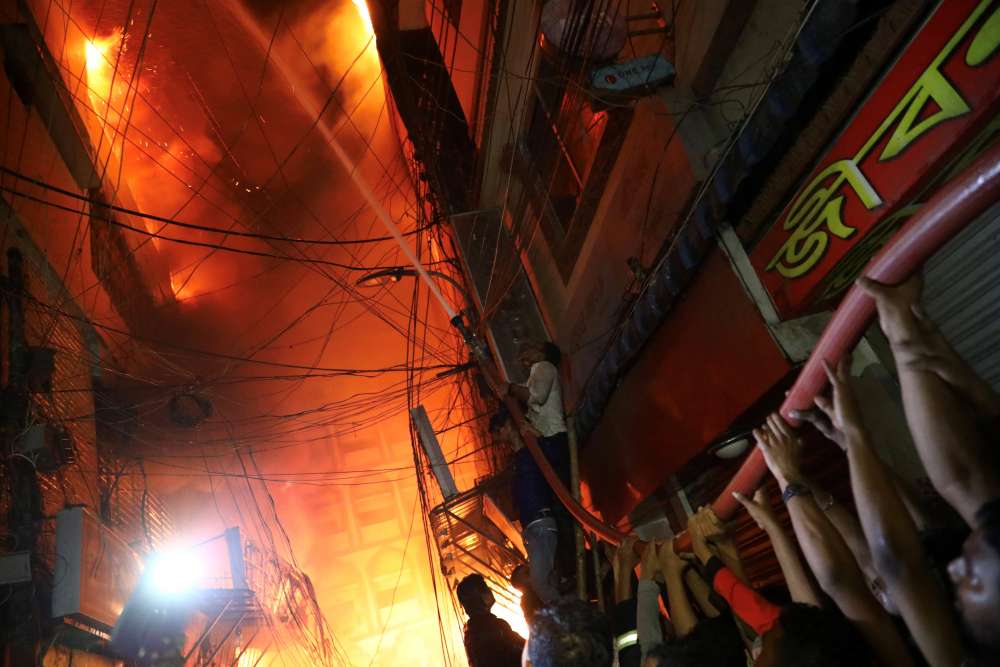 As many as 70 people died in a major fire that engulfed several buildings in a centuries-old neighbourhood of the Bangladesh capital, a fire official said on Thursday, warning the toll could climb as fire fighters scour the rubble.

Lax regulations and poor enforcement of rules in impoverished Bangladesh have often been blamed for several large fires that have led to hundreds of deaths in recent years.

The city’s worst fire since 2012 broke out late on Wednesday night in a five-storey building, before spreading to others nearby in the Chawkbazar precinct, parts of which date back more than 300 years to the Mughal period.

“So far, 70 bodies have been recovered,” Julfikar Rahman, a director of the Fire Service and Civil Defence, told Reuters. “The number could rise further as the search continues.”

At least a dozen of the roughly 50 people taken to hospital were in critical condition, Rahman added. Hundreds of distraught relatives thronged the DhakaMedical College and Hospital to seek missing relatives, witnesses said.

“All of them were crying and desperate,” said a Reuters witness. “Relatives entered the morgue and searched a register for the names of their nearest and dearest.”

About 200 firefighters had battled for more than five hours to contain the blaze in narrow lanes snaking between tightly-packed buildings in an area authorities say is home to more than 3 million people.

At least 81 people died after a devastating fire tore through a number of buildings in Bangladeshi capital Dhaka pic.twitter.com/6iRdHhGeRL

Firemen said they struggled to get enough water to douse the flames and had to pump supplies from a nearby mosque.

“The area is so congested, there is no wide space or spacious road to easily bring in water,” fire official A K M Shakil Nowaz told Reuters at the site. “We didn’t find any water source nearby, so it took several hours to put out.”

The fire broke out in a building with shops on its ground floor, a warehouse for plastics and flammable material on the first, and homes on three floors above, said Shamim Harun ur Rashid, a local police official.

“It is unclear whether anyone who lived on the floors above is alive,” said Rashid, adding that the cause was being investigated.

Witnesses said the blaze spread after the explosion of gas cylinders in an adjoining restaurant and a parked van.

Hundreds of burnt perfume or deodorant cans littered the road near the partially collapsed building where the fire began, a Reuters witness said.

The fire has revived concern about lax enforcement of building safety regulations.

“This tragic incident happened due to the indifference and callousness of the government, as well as mismanagement,” said Mirza Fakhrul Islam Alamgir, secretary general of the opposition Bangladesh Nationalist Party (BNP).

Residents had several times urged authorities to relocate the warehouses in the area, but were not heeded, said school teacher Mohammad Hemayet Uddin.

“After the Nimtoli tragedy we urged our local leaders not to allow any more godowns that are a danger for us,” he added, referring to a 2010 fire that killed at least 124.

“We need cooperation to find such illegal godowns as the area is vast and houses thousands of buildings,” Sayeed Khokon, the South Dhaka mayor, told media.

Bangladesh has set up a five-member panel to inquire into the fire, Home Minister Asaduzzaman Khan told media, adding that Prime Minister Sheikh Hasina was monitoring the situation.

In 2012, a fire in a garments factory on the outskirts of Dhaka killed as many as 117 people and injured more than 200 in the country’s worst industrial blaze.