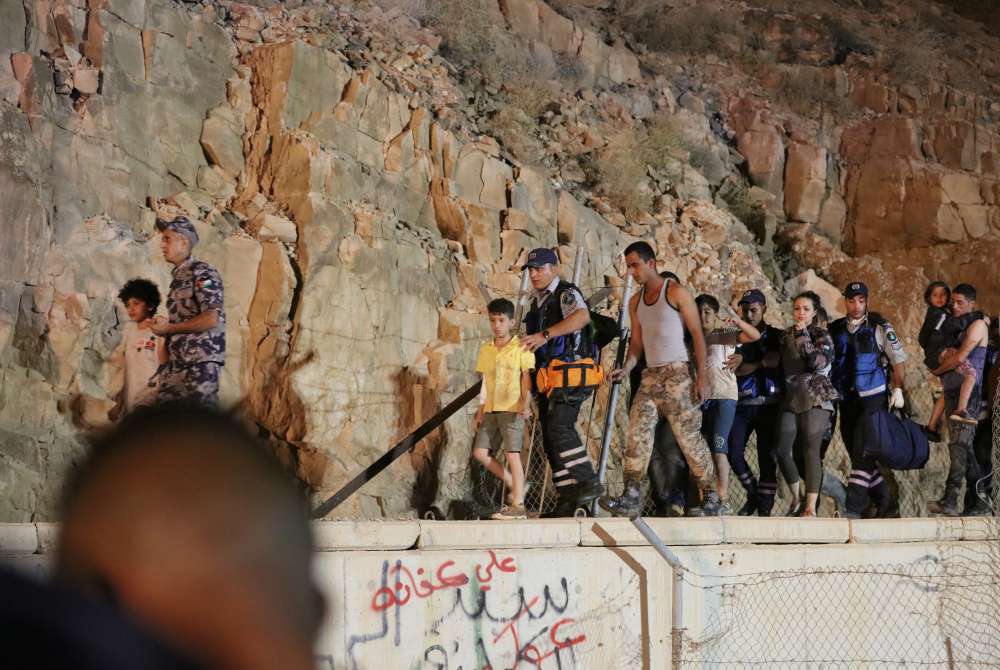 At least 18 people, mainly schoolchildren and teachers, were killed on Thursday by a flash flood during a school outing near Jordan‘s Dead Sea in one of the worst disasters in the kingdom in years, rescuers and hospital workers said.

Thirty-four people were rescued in a major operation involving police helicopters and hundreds of army troops, police chief Brigadier General Farid al Sharaa told state television. Some of those rescued were in a serious condition.

Many of those killed were children under 14. A number of families picnicking in the popular destination were also among the dead and injured, rescuers said, without giving a breakdown of numbers.

Hundreds of families and relatives converged on Shounah hospital a few kilometres from the resort area. Relatives sobbed and searched for details about the missing children, a witness said.

The flooding occurred after heavy rainfall, the first such rains after the end of the summer season.

Prime Minister Omar Razzaz said it appeared the school had broken regulations by the ministry of education that forbade trips to the Dead Sea due to bad weather and pledged an investigation that would hold anyone found responsible for any wrongdoing accountable.

Razzaz said divers and civil defence search teams would be conducting search operations deep inside the Dead Sea throughout the night.

A father of one of the survivors said a bus with 37 schoolchildren and seven teachers had been on a trip to the resort area. They were caught in a narrow stream as sudden torrential rainstorm flooded the area.

“The children tried to escape the floods by going to the bus but its doors were closed,” said Abu Yousef told reporters.

“The teachers tried to save the children but the floods intensity made it impossible,” he added saying the children were swept to the shores of the Dead Sea, the lowest point on Earth.

Neighbouring Israel sent search-and-rescue helicopters to assist, an Israeli military statement said, adding the team dispatched at Amman’s request was operating on the Jordanian side of the Dead Sea.

Civil defence spokesman Captain Iyad al Omar told Reuters the number of casualties was expected to rise. Rescue workers using flashlights were searching the cliffs near the shore of the Dead Sea where bodies had been found.

There have been deadly incidents involving flash floods in Jordan in the past and in 1963, 23 French tourists were swept away by flash floods when they were trapped in the ancient Petra city.