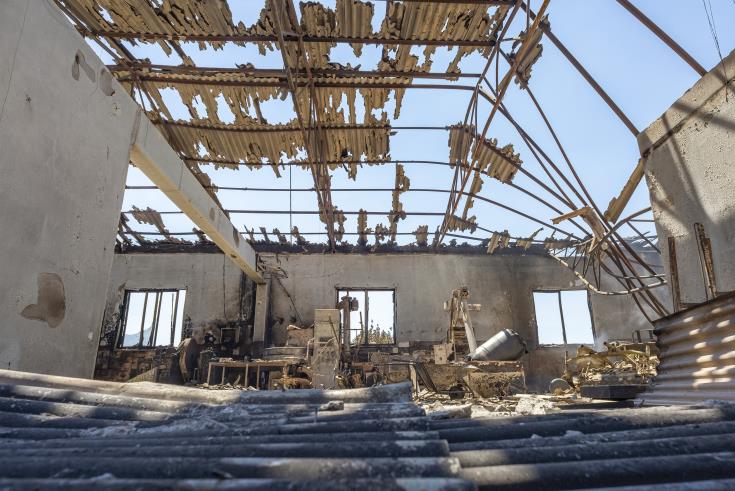 Ashes and devastation have replaced the green mountains, homes and cultivations in Larnaca district villages where the fire swept through over the weekend, leaving behind it four deaths and destruction.

A large part of Larnaca mountainous areas, with scenic green routes providing a respite from the nearby cities, turned to a desolate black, smoky site with thick smoke that lingered on one’s skin.

As the Cyprus News Agency toured the burnt areas in the Larnaca district, it witnessed new and old traditional houses devoured by the fires, gardens that were gone and cars which only their frames survived the aftermath while electricity poles turned to dust. The smoke that ensued from the fire that started at Arakapas village of Limassol district turned the sky red on a lazy Saturday afternoon with people along Larnaca to Paralimni in complete shock as to the extent of the blaze.

Helicopters of the Republic of Cyprus and Israel as well as planes from the Forestry Department continued until the early hours of Monday with water bombs to put out the last remnants of fire.

Odou community leader Menelaos Philippou told CNA that they were recording all damage to plantations, businesses as well as farms. Volunteers distributed food and clothing as others were cleaning up.

Tomato plantations and apiaries were destroyed, 26 tonnes of honey burnt and thousands of beehives ruined. “We are expecting immediate help and support to recover from this disaster, set up our plantations again and continue with our lives”, said Philippou. We never expected that such thing would ever happen to us”, he added.

He criticised those who said the four Egyptian workers who were killed, were ignored by the community.

A delegation of the Cyprus Agricultural Payments Organisation chaired by Andreas Evangelou said the organisation will stand by the farmers and hoped that soon they will receive compensation for property destroyed.

Vavatsinia community leader Andreas Gavriel said the residents of the area were scared for their lives as the fire was heading towards the village. Only cultivations were burnt and some trees as the village was spared from the brunt of the fire due to the change of winds.

We cannot underestimate the work of anyone. What happened here was tremendous, he added.

Regional officer of the Nicosia, Larnaca and Famagusta Forestry Department, Kyriakos Monogios praised the work of the air tankers as they help land forces in getting fires under control. The Canadair planes, he added, picked up water from the sea while the Police helicopters and the Russian helicopters that were on loan picked up water from dams in the region allowing for more frequent water attacks on the fires.

He described the latest blaze as tremendously difficult, adding that in Cyprus we must get used to the fact that things change with global warming and dry land. Saturday’s fires, he said, were helped by the strong winds and high temperatures.

At the coordination centre of the Forestry Department at Vavatsinia, CNA found the crew of the two Israeli aircraft sent to help put out the fires. Captain Doron Eli Melekh, of the Israeli Air Fire Brigade, told CNA that “we came from Israel, with two aircraft and 20 personnel, to help Cyprus in the great fire. It was a very big fire, which spread very quickly…”

He added that “when we arrived in Cyprus the fire was already under control and so we helped local teams to fight the fire on many small fronts, to prevent its spread”.

Melekh said although the land and weather conditions in Israel are similar to the ones in Cyprus, the latest fire was indeed greater.

Head of the EAC board, Michalis Komodromos also visited Vavatsinia and said the EAC technicians worked until the early hours to restore power in the communities. He also praised the EAC staff for working tirelessly.

Melini community leader, Christoforos Alecou described as biblical the destruction caused to Larnaca and Limassol communities because the fire spread so fast that the people were startled.

Thank Goodness, he said, we managed to evacuate the community and no people were killed. Three houses were completely destroyed and another ten suffered extensive damage. Plantations were also destroyed. “I am completely dismayed by the total destruction which farmers in the community are facing. Fruit and vegetable plantations were destroyed as well as irrigation systems and equipment worth thousands of euros. People need immediate support. They have nothing to turn to now”, he added.

By gavriella
Previous article“Are You This or Are You This?” new memoir by Cypriot author
Next articleWhere to get a free rapid test on Wednesday, 7 July