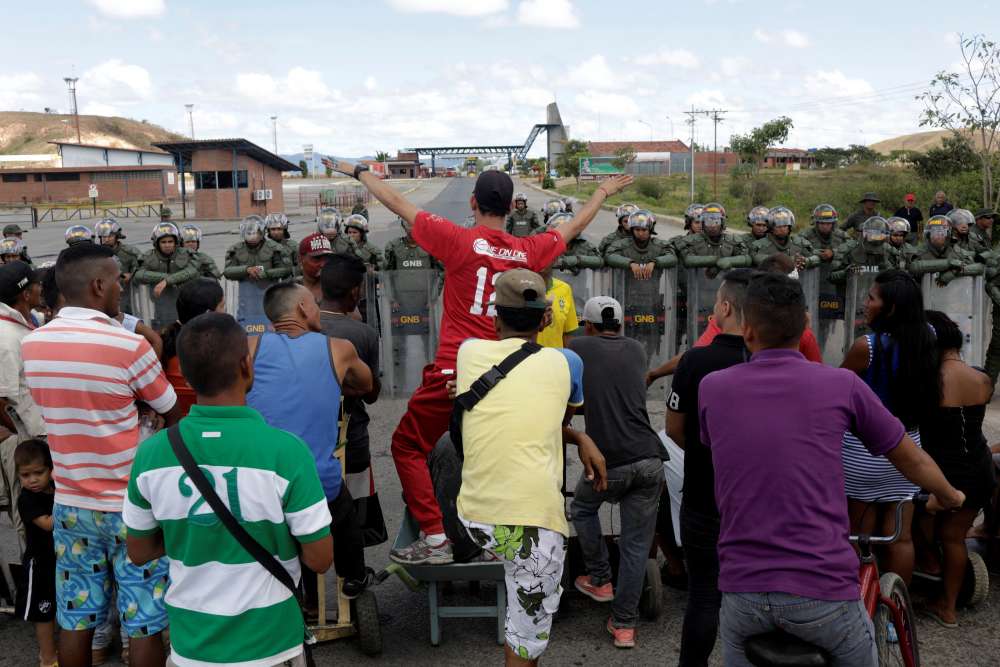 Venezuelan soldiers opened fire on indigenous people near the border with Brazil on Friday, killing two, as President Nicolas Maduro sought to block U.S.-backed efforts to bring aid into his economically devastated nation.

The United States, which is among dozens of nations to recognize opposition leader Juan Guaido as Venezuela’s legitimate president, has been stockpiling aid in the Colombian frontier town of Cucuta to ship across the border this weekend.

With tensions running high after Guaido invoked the constitution to declare an interim presidency last month, Maduro has denied there is a humanitarian crisis in Venezuela despite widespread shortages of food and medicine and hyperinflation.

He says the opposition efforts are a U.S.-backed “cheap show”.

The socialist president, who took power in 2013 and was re-elected in an election last year widely viewed as fraudulent, has declared Venezuela’s southern border with Brazil closed ahead of the opposition’s plan to bring in the aid on Saturday. Late on Friday the government shuttered the Tachira frontier that connects with Cucuta.

Some political analysts say the looming showdown is less about solving Venezuela’s needs and more about testing the military’s loyalty to Maduro by daring it to turn the aid away.

With inflation running at more than 2 million percent a year and currency controls restricting imports of basic goods, a growing share of the country’s roughly 30 million people is suffering from malnutrition.

Guaido showed up late on Friday at a fundraising concert in Cucuta backed by British billionaire Richard Branson that was estimated to have attracted nearly 200,000 people.

His appearance, arm-in-arm with Colombian President Ivan Duque, was an open challenge to Maduro given that the pro-government Supreme Court has banned him from international travel on grounds he is under investigation for allegedly helping foreign countries to interfere in internal matters.

Friday’s violence broke out in the village of Kumarakapay in southern Venezuela after an indigenous community stopped a military convoy heading toward the border with Brazil that they believed was attempting to block aid, according to community leaders Richard Fernandez and Ricardo Delgado.

Soldiers later entered the village and opened fire, killing a couple and injuring several others, they said. A regional official confirmed that two people were killed.

“I stood up to them to back the humanitarian aid,” Fernandez told Reuters. “And they came charging at us. They shot innocent people who were in their homes, working.”

Seven of the 15 injured were rushed by ambulance to a hospital in the Brazilian frontier city of Boa Vista, a spokesman for the state governor’s office said.

Diosdado Cabello, one of the most prominent figures in Maduro’s Socialist Party, accused the civilians involved in the clash of being “violent groups” directed by the opposition.

Venezuelan security forces have executed dozens and detained hundreds of others since protests broke out in January against Maduro’s swearing-in, according to civil rights groups.

Asked about the deaths, Arreaza told reporters the armed forces would never take disproportionate action against its own people: “Our armed forces are known for their humanism.”

The U.S. special envoy for Venezuela, who joined regional leaders and diplomats in Cucuta to show support for the opposition, called the killings “a crime and a disgrace”.

“We continue trying to bring humanitarian aid to the people of Venezuela.”

China, which along with Russia backs Maduro, warned that humanitarian aid should not be forced across the border because doing so could lead to violence.

BLOODSHED ‘NOT IN VAIN’

The bloodshed contrasted with a joyful mood at Branson’s “Venezuela Aid Live”, where Venezuelan and Colombian attendees, some crying, waved flags and chanted “freedom” under a baking sun.

“Is it too much to ask for freedom after 20 years of ignominy, of a populist Marxist dictatorship?” Venezuelan singer Jose Luis “El Puma” Rodríguez asked. “To the Venezuelans there, don’t give up: the blood that has been spilled was not in vain”.

Earlier in the day, Branson held a news conference near a never-used border bridge that Venezuelan authorities have blocked with shipping containers.

“What we’re hoping is that the authorities in Venezuela will see this wonderful, peaceful concert … and that the soldiers will do that right thing,” Branson said.

As well as the foreign aid stockpiled in Cucuta, Guaido has vowed to bring in aid on Saturday from the Brazilian town of Boa Vista and the Dutch Caribbean island of Curacao.

“The people of Venezuela are not begging, they’re resisting a dictatorship, the onslaught of oppression,” Guaido told a news conference in Cucuta after the concert. “Tomorrow … everyone will be on the streets demanding the entry of humanitarian aid, thanking the world for this unprecedented coalition.”

Brazil said on Friday it had 200 tonnes of food and medicine ready for Venezuela but only one truck had arrived to pick it up before the border was closed.

Venezuela’s borders are porous, however, and supporters could attempt to bring in aid outside the official entry points.

Guaido’s move to assume the interim presidency and international backing has galvanized Venezuela’s opposition, which has vowed to keep protesting until Maduro steps down. Major protests in 2014 and 2017 waned in the face of crackdowns.

Some government critics are concerned it will take more than pressure to force Maduro to step down.

“The truth is that not even 10 concerts will make damned Maduro leave office,” said Darwin Rendon, one of the 3.4 million Venezuelans to have emigrated since 2015 to find work. He sends what little he earns selling cigarettes to his family in Caracas. “This regime is difficult to remove.”