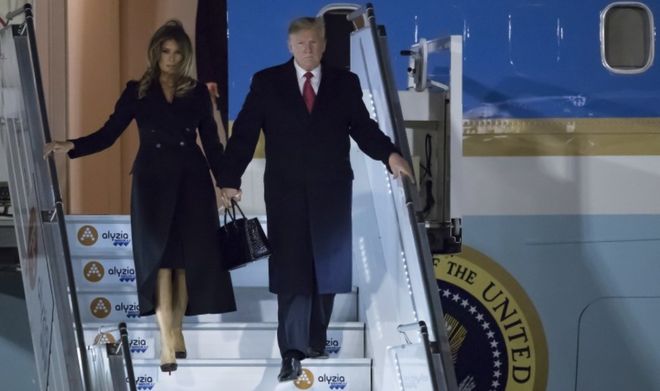 President Donald Trump has lashed out at his French counterpart Emmanuel Macron, after arriving in Paris to commemorate the end of World War One.

On Twitter, Mr Trump said it was “very insulting” that his host had called for a joint EU army to handle threats from the US, China and Russia.

Mr Macron said on Tuesday that Europe “had to protect itself”.

The two men will meet for scheduled talks on Saturday morning ahead of events commemorating the 1914-18 war.

Around 70 world leaders are gathering in Paris for events marking the Armistice that ended World War One, which was signed 100 years ago this Sunday.

What did Macron say?

President Macron has previously warned that Europeans can no longer rely on the US to defend them, and returned to the theme on Tuesday during a visit to the former Western Front in Verdun.

“We have to protect ourselves with respect to China, Russia and even the United States of America,” he told French radio station Europe 1.

“Who is the main victim? Europe and its security. I want to build a real security dialogue with Russia, which is a country I respect, a European country – but we must have a Europe that can defend itself on its own without relying only on the United States.”

Russia’s President Vladimir Putin will be among world leaders marking the Armistice in Paris.

President Trump’s Friday night rebuke read: “President Macron of France has just suggested that Europe build its own military in order to protect itself from the US, China and Russia. Very insulting, but perhaps Europe should first pay its fair share of NATO, which the US subsidizes greatly!”