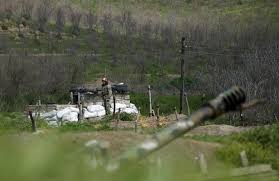 Russian Foreign Minister Sergei Lavrov said Armenia and Azerbaijan had agreed to a ceasefire, starting from 12:00 on Saturday, to exchange prisoners and bodies of those killed in the conflict.

Lavrov made the statement after 10-hour-long talks with his Armenian and Azeri counterparts in Moscow around 3:00 in the morning local time.

He also said Armenia and Azerbaijan agreed to start talks on the settlement of the conflict.

On Friday, Azeri and ethnic Armenian forces had fought new clashes marking the deadliest battles in the South Caucasus for more than 25 years.

More than 400 people have been killed in the fighting in and around Nagorno-Karabakh, a mountain enclave which under international law belongs to Azerbaijan but is populated and governed by ethnic Armenians.

Azerbaijan’s defence ministry said there had been fierce clashes with ethnic Armenian forces during the night along the line of contact that divides the two sides in Nagorno-Karabakh.

The latest fighting in the decades-old conflict over Nagorno-Karabakh had raised fears that Turkey, a close ally of Azerbaijan, and Russia, which has a defence pact with Armenia, will be dragged into the conflict. (Reuters)