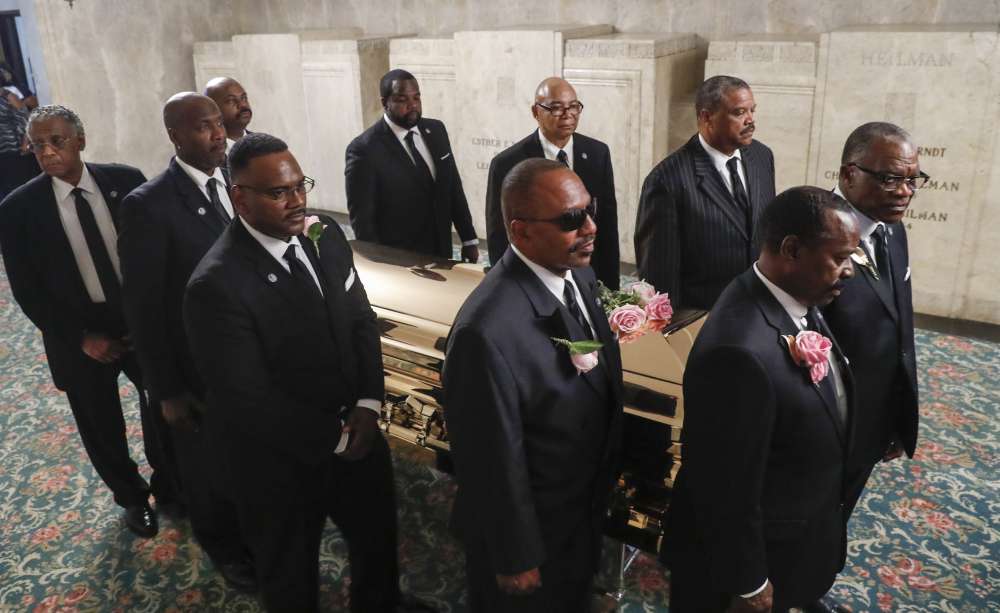 A Detroit church swelled with the sound of gospel music on Friday as family, friends and fans of Aretha Franklin bid rousing farewell to the Queen of Soul at a funeral that featured tributes by former U.S. President Bill Clinton and singer Stevie Wonder.

“Come on, this is a church service, lift your voice!” Bishop Charles Ellis III, the officiant, exhorted the congregation at the Greater Grace Temple, as the choir and orchestra swayed behind him.

The crowd grew louder, its ranks bolstered by the powerful voices of Gladys Knight, Jennifer Hudson, Chaka Khan, Shirley Caesar and Ariana Grande, who came to pay musical tribute to Franklin following her death on Aug. 16 at age 76.

Before the golden casket was closed at the top of a service, Franklin’s body could be seen dressed in gold sequins. More than eight music-filled hours later, Stevie Wonder took to the stage to close out the ceremony with a performance of his song “As,” the crowd joining him in its refrain: “I’ll be lovin’ you always.”

“She had the voice of a generation, maybe the voice of a century,” Clinton said, describing himself as a Franklin “groupie” long before he became president. Ending his remarks, Clinton held the microphone to his smartphone and played Franklin’s 1968 hit “Think” over the church’s speakers.

Civil rights leaders Jesse Jackson and Al Sharpton were onstage to honor Franklin’s contributions to black empowerment, sharing front-row seats with Louis Farrakhan, the black nationalist and Nation of Islam leader. Sharpton took to the pulpit to laud Franklin for providing the soundtrack of the movement, with songs such as her signature 1967 hit “Respect.”

Franklin was recalled as both an American institution, who sang at the presidential inaugurations of Jimmy Carter, Bill Clinton and Barack Obama, and as an aunt and grandmother, who took her young relatives shopping or to see Disney on Ice shows.

“Nothing sounded better to me than the way my grandma sings,” Victorie Franklin said.

Smokey Robinson, the Motown singer and a long-time friend, crooned a few lines of his song “Really Gonna Miss You.” Ariana Grande belted out “Natural Woman” while Gladys Knight took on “You’ll Never Walk Alone.” An ensemble performance of “Precious Lord” so moved the congregation that the officiant told the orchestra to keep vamping as clergy danced on the stage, expanding a program that by then was already running two hours behind schedule.

The funeral had been billed as closed to the public, but crowds of fans gathered outside, many dressed in their Sunday best. “This is as close you get to royalty here in America and Aretha earned every bit of it,” said Missy Settlers, 53, an automotive parts assembler. Some fans were admitted into the church to sit behind Franklin’s family.

Franklin, who died at her Detroit home from pancreatic cancer, began her musical career as a child singing gospel at the city’s New Bethel Baptist Church.

The city has treated her death as the passing of royalty, with Franklin’s body laying in repose in the Charles H. Wright Museum of African American History for two days of public visitation earlier this week.

Her coffin is to be entombed in Detroit’s Woodlawn Cemetery near the remains of her father; her brother, Cecil Franklin; and her sisters, Carolyn and Erma Franklin.