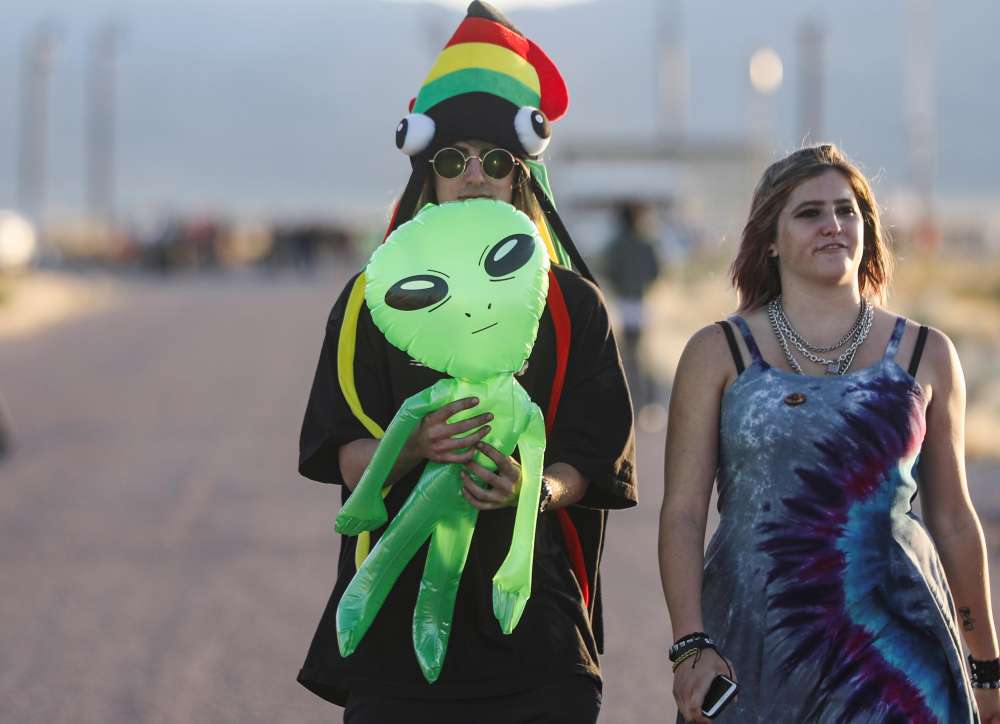 UFO enthusiasts drawn by alien-themed festivities poured into rural Nevada on Friday near the Area 51 U.S. military base, but fears of a mass raid on the remote site or a public safety crisis proved unfounded, with only five people arrested.

More than 3,000 out-of-towners ventured on Thursday and Friday to the desert region around Area 51, a secretive U.S. Air Force installation long rumored to house government secrets about extraterrestrial life and spaceships.

The pilgrimage and two festivals welcoming the visitors were organized after a Facebook user jokingly exhorted readers to “storm” Area 51 on Sept. 20 “to see them aliens.” The date chosen for the gathering was never explained.

Lincoln County Sheriff Kerry Lee said the region’s guests were largely well behaved, with just a few exceptions. “I don’t want to jinx myself, but so far it’s gone pretty well,” he said on Friday afternoon.

Three people were arrested on suspicion of trespassing onto the grounds of Area 51, Lee said. Another was arrested for indecent exposure after urinating near an entrance to the base, and a fifth for an alcohol-related incident, Lee said. 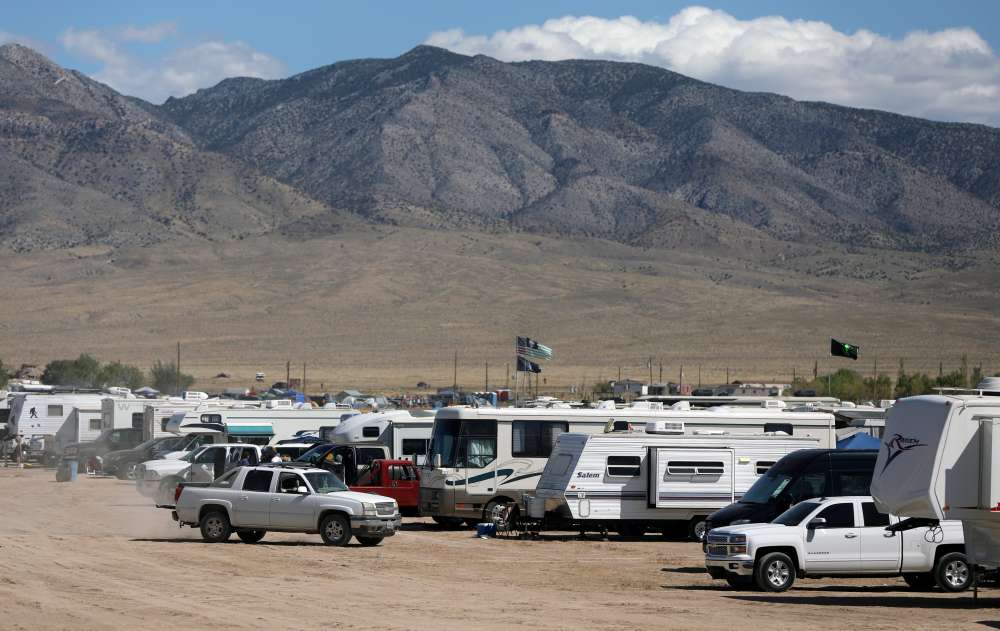 A steady stream of cars continued rolling into the county on Friday for events that were scheduled to run through the weekend.

The arrests were reported after a group of about 150 UFO fans and curiosity-seekers gathered outside the heavily guarded entrance to Area 51 around 3 a.m. on Friday, the date and time set by the social-media invitation that went viral.

One man wore an orange space suit and some sported tin foil hats and alien masks. A sign among the gathering read “Free E.T. from the government.”

“A bunch of random people in weird costumes standing outside of a government base, why would you want to miss that?” said a YouTube personality who goes by the name Atozy. “That’s a once-in-a-lifetime experience.”

One young woman ducked under a protective gate and was momentarily detained by authorities and released. Most showed no interest in crossing the barrier, according to law enforcement officials keeping watch over the crowd. 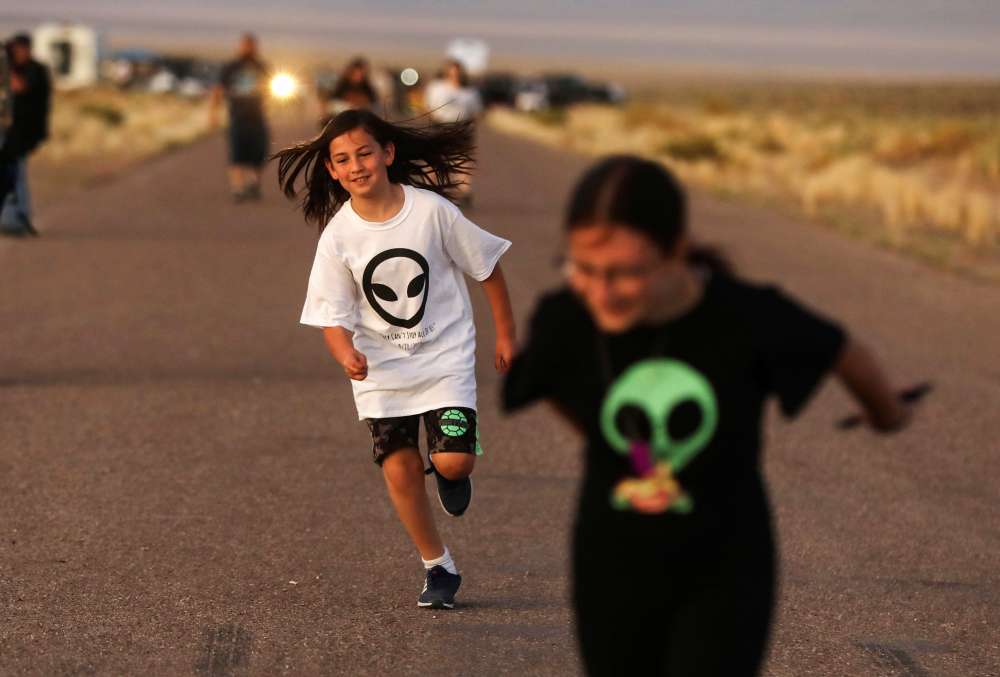 The Air Force had issued a stern warning to the public not to trespass on the installation, which it said is used to test aircraft and train personnel.

Area 51 had long been shrouded in mystery, stoking conspiracy theories that it housed the remnants of a flying saucer and the bodies of its alien crew from a supposed unidentified flying object crash in Roswell, New Mexico, in 1947. The U.S. government did not confirm the base existed until 2013, when it released CIA archives saying the site was used to test top-secret spy planes.

The documents, however, did not end suspicion about space aliens there. 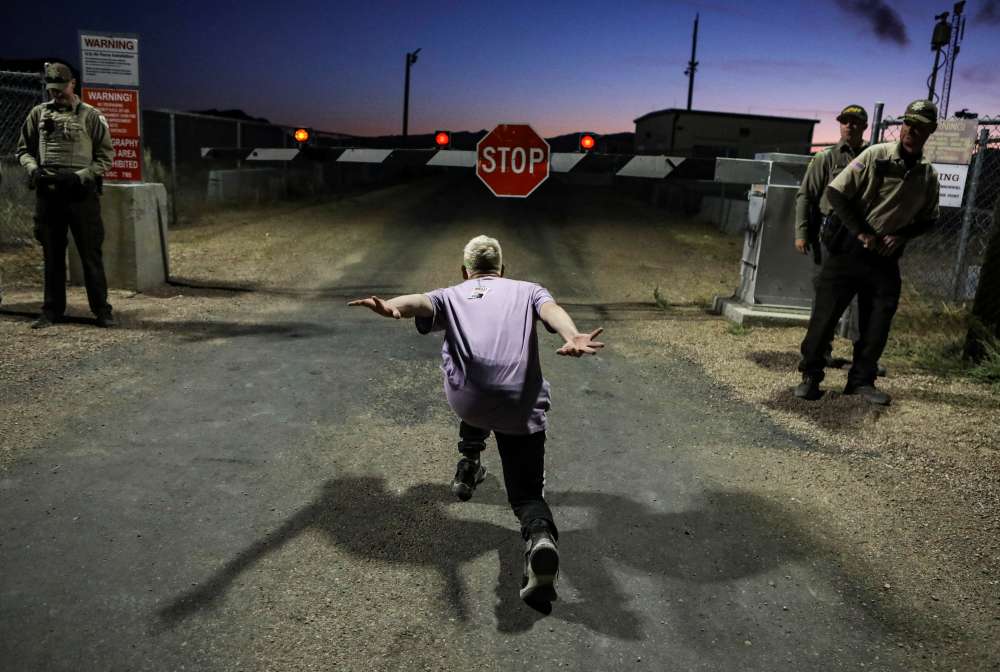 Area 51 sits about 12 miles (19 km) from the tiny town of Rachel, a community of about 50 year-round residents north of Las Vegas that hosted a music festival to entertain those traveling to the region.

Some residents had urged the public to stay away for fear the town would be overwhelmed with unruly tourists.

As of early Friday, about 3,000 people had pitched camp in town, most of them outside the Little A’Le’Inn, an alien-themed motel and restaurant that is Rachel’s only business. Another 250 attended a separate event 40 miles away in Hiko that featured musicians and ufologists.

Ed Callahan, 49, who drove from Victorville, California, to Rachel, described the atmosphere as “just chill.”

“It’s not this big, wild thing,” said Callahan, who sported a cowboy hat covered in tin foil and silver tentacles. “When they said 40,000 people, I didn’t want it to be that. If a few more people show up, it’d be all right.” 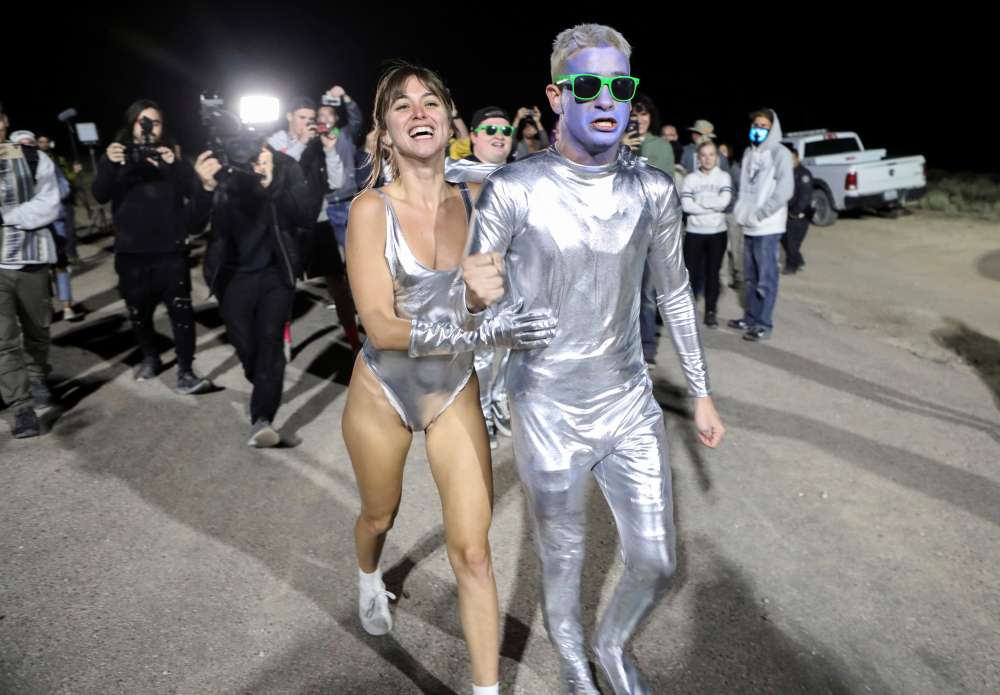 Connie West, the Little A’Le’Inn co-owner who scrambled over three months to mobilize for an influx of alien fans, said she was gratified that chaos failed to ensue.

“I’m relieved the naysayers were proven wrong,” she said.

By In Cyprus
Previous articleMinister of Foreign Affairs to participate in the 74th Session of the UN General Assembly
Next articleMainly fine on Saturday, local showers possible on Sunday