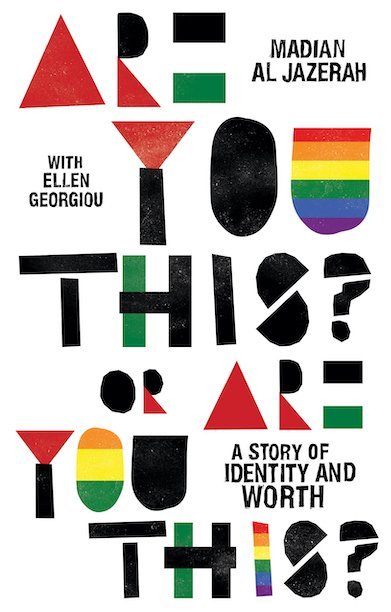 London-based Hurst Publishers is delighted to announce the publication of “Are You This or Are You This?” a gay man’s memoir of hardship, community and kin in the Arab world and beyond written by local journalist Ellen Georgiou Pontikis.

When Madian Al Jazerah comes out to his Arab parents, the only question his mother has is: “Are You This? Or Are You This?” and extends a poking finger.  If you are the poker, she states, you are not a homosexual.

The author shows how “Are You This? Or Are You This?” transcends sexuality and is about patriarchy, domination and power.  Moreover, it’s an issue of identity and worth. He is a Palestinian but it’s not where he’s from.  He was born in Kuwait but he’s not a Kuwaiti. He’s a Muslim but cannot embrace the Islam of today. He’s an Arab, but has blond hair, blue eyes and a British accent. He’s a gay man, out of the closet but still in the shade.

When he opened a business in Jordan, it was an immediate success and took on a life of its own becoming a center for human rights. It was not the intention, but making a living turned into a cause.  The author’s sexuality, however, makes him a target and he leaves Jordan three times in fear of his life.

He moves around the world – San Francisco, Hawaii, New York, Amman, Tunisia – searching for worth, but steals our hearts from the first as he deals with adversity, racism, and homophobia with resilience steeped in humour, dignity and grace

“This memoir would not be possible without Ellen,” says Al Jazerah.  “She shared my vision for a book and then proceeded to write it. I rambled on about my experiences and then left her to make sense of my scrambled recollections of a very fractured life.”

“It is,” says Georgiou Pontikis, “a story that needs to be told. It a beautiful memoir of love and family and kinship that are undercurrents of a tumultuous life lived in the face of homophobia and adversity. It is also extremely timely as it addresses Palestine, Zionism and gay rights in the Arab world.”

The book is available at Moufflon Bookshop Nicosia, Academic & General Bookshop in Larnaca, and KP Kyriakou Bookshop in Limassol.  It is also available from Amazon.co.uk.

It will be released in the USA in September by Oxford University Press.

What others are saying:

‘A riveting and revealing journey of identity, politics and love in the Arab world. Brave in its honesty, and beautiful in its simplicity.’ — Rana Sweis, author of Voices of Jordan; journalist for The New York Times and others

‘Written with the poetic courage of someone who has experienced both the beauty and the trauma of the world.’ — Afshan D’souza-Lodhi, poet and playwright

‘This fearless memoir, told with warmth and compassion, is an inspiration. Navigating deftly between family drama, social insight and poignant emotion, it is searingly honest and thought-provoking, driven by a desire for hopeful change. I loved it.’ — Matthew Teller, author of Quite Alone: Journalism from the Middle East 2008–2019

‘The story of a great man, full of emotions, pride, dignity and determination. A tale of hope in a world of colliding identities; a must-read!’ — Fadi Zaghmout, blogger and author of The Bride of Amman

‘A moving narrative of remarkable courage and sensitivity, which weaves together a tapestry of displacement and belonging, of seeking and giving refuge, and of seeing and insisting on being seen.’ — Safwan M. Masri, Columbia University

Madian Al Jazerah is a Palestinian Jordanian who was born in Kuwait. In 1997 he opened Amman’s [email protected], the first internet cafe/bookstore in the Arab world. Since its founding he has been engaged in human rights work and LGBTQI activism.

Ellen Georgiou Pontikis is a local journalist who has worked at The Cyprus Weekly, CYBC, the BBC World Service, and CNN.  She lives in Nicosia.

By Annie Charalambous
Previous articleProfessor: Surge in Covid cases alarming
Next articleAshes and devastation all that’s left from fire that razed through Larnaca communities