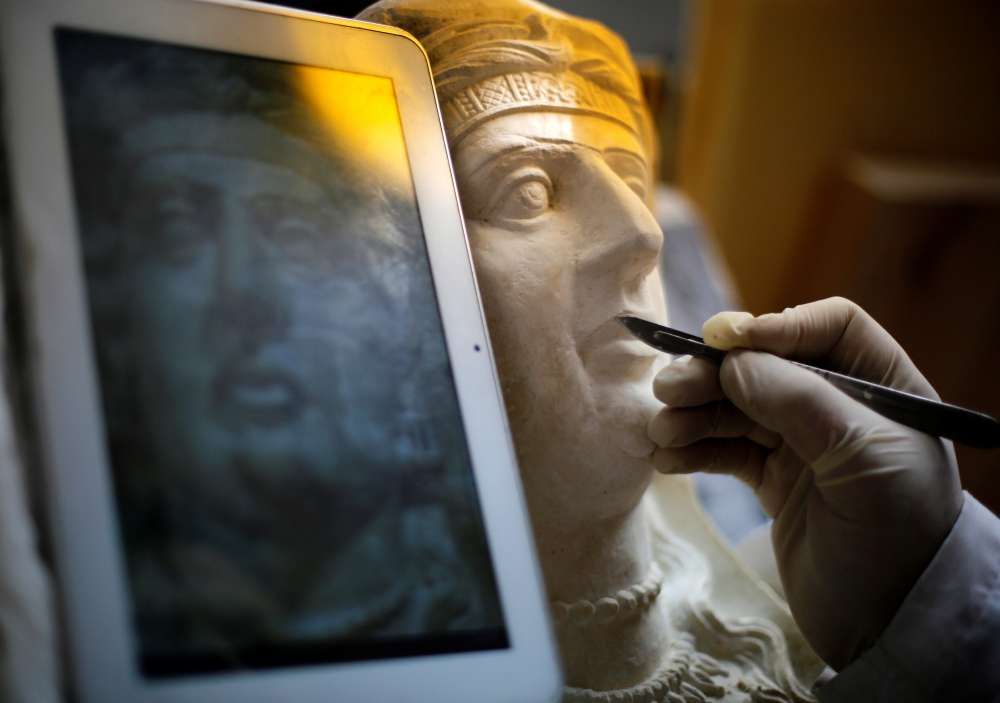 In the National Museum of Damascus, archaeologist Muntajab Youssef works on an ancient stone bust from Palmyra, one of hundreds of artefacts his team is painstakingly restoring after they were damaged by Islamic State.

Centuries-old statues and sculptures were wrecked by the jihadists when they twice seized control of the old city in central Syria during the country’s war, which will go into its ninth year in March.

The 1,800-year-old bust of a bejewelled and richly clothed woman, The Beauty of Palmyra, was damaged during the first offensive on the city by Islamic State fighters in 2015.

After Syrian government forces took back the city with Russian military support in March 2016, the bust, alongside other damaged ancient monuments, was taken to Damascus and archived in boxes. When restoration work on it began last year, Youssef said it was in pieces.

“The hands and face were lost completely, also parts of the dress and there are areas that are weaker,” Youssef, who has been working on the bust for two months, said.

Youssef is one of 12 archaeologists working on the arduous restoration job, which first began with the of moving the damaged pieces to Damascus.

Mamoun Abdulkarim, the former Head of Syrian Antiquities, said that in some cases broken artefacts were transported in empty ammunition boxes provided by the Syrian army in Palmyra.

How many artefacts there are in total is difficult to say, given the state they were found in.

The lack of documentation for the artefacts also adds to the restoration challenge.

“A big part of the documentation in the Palmyra museum, was damaged with the antiquities and computers,” archaeologist Raed Abbas said. “A statue needs pictures … in order to be rebuilt.”