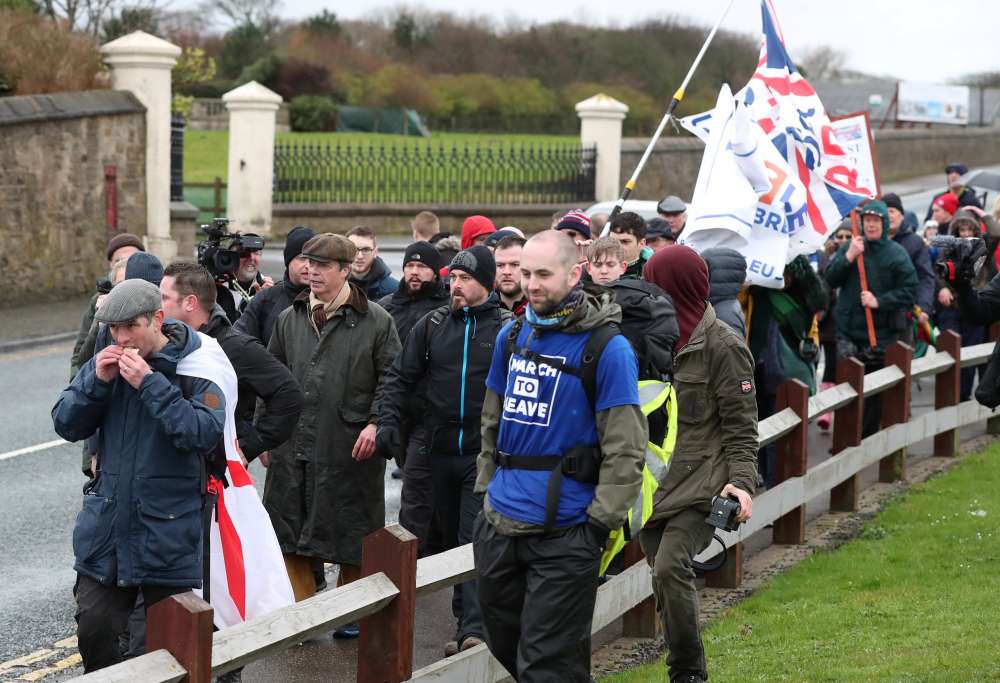 Nigel Farage, the politician who probably did more than anyone else to force Britain’s referendum on membership of the European Union, joined protesters at the start of a 270-mile march over what they call a betrayal of the Brexit vote.

The march comes after another tumultuous week for Prime Minister Theresa May in which parliament overwhelmingly rejected her divorce deal for a second time and lawmakers voted to seek a delay in Britain’s exit from the EU.

In the pouring rain in Sunderland, northeast England, which was the first place in Britain to declare a vote to leave the EU, Farage, wearing a flat cap and carrying an umbrella, said Brexit was now in danger of being scuttled by the establishment.

“We are here in the very week when parliament is doing its utmost to betray the Brexit result,” Farage said. “It is beginning to look like it doesn’t want to leave and the message from this march is if you think you can walk all over us we will march straight back to you.”

The march, which began with about 100 people, is due to end at parliament on March 29, the day the United Kingdom was supposed to leave the EU.

Britain’s crisis over EU membership is approaching its finale as May continues to fight to build support for her divorce deal, which is expected to be put before lawmakers for a third time next week. Many Brexit supporters in her own party oppose the deal, saying it ties Britain too closely to the EU.

May has given those critics an ultimatum – ratify her deal by Wednesday or face a delay to Brexit way beyond June 30 that would open up the possibility that the entire departure from the EU could ultimately be thwarted.

As leader of the eurosceptic United Kingdom Independence Party, Farage pressured former prime minister David Cameron to call the Brexit referendum and then helped lead the campaign to leave the EU. But he quit as the party’s leader in the days after the referendum.

In what pro-EU supporters said was a metaphor for his decision to walk away from the fallout of Brexit, Farage said he wouldn’t be completing the full two-week walk to London but would instead join campaigners for about a third of it.

Farage defended that decision and said as a member of the European Parliament he may have to take part in a vote on whether to approve the Brexit deal.