Any ideas on the Cyprus problem must not deviate from UNSC resolutions, Cyprus President tells British High Commissioner 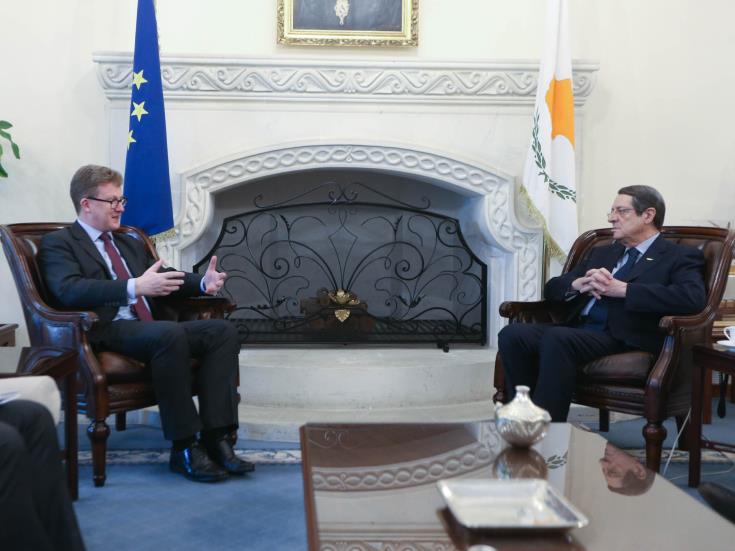 Any proposals or ideas related to the Cyprus problem must not deviate from the UN Security Council resolutions framework, always aiming at the evolution of the Republic of Cyprus to a functional and viable state, without anachronistic systems of guarantees and the presence of foreign troops, Cyprus President, Nicos Anastasiades stressed to the UK High Commissioner to Cyprus, Stephen Lillie, during a meeting they had on Wednesday.

According to a written statement by Government Spokesperson, Marios Pelekanos, on his part, the British High Commissioner reaffirmed the position of Britain for the resumption of negotiations on the basis of the agreed framework, giving some explanations as to the initiatives which are taken by the British government.

Pelekanos said that during the meeting, which took place at the High Commissioner`s request, Anastasiades and Lillie exchanged in a frank way views on the prospects for the resumption of the talks on the Cyprus problem.

President Anastasiades expressed his readiness to hold a common meeting with the Turkish Cypriot leader, in the presence of the UN Secretary – General, as he also did in the letter he sent to the UN Secretary General on August 30, 2021, aiming at the resumption of th talks, on the basis of the agreed framework, the Spokesman noted.

Moreover he said that during the meeting President Anastasiades also underlined the need to adopt bold and substantive confidence building measures that have repeatedly been submitted to the Secretary – General, and will reinforce efforts for the resumption of the talks.

By gavriella
Previous articleRapid antigen testing units – Thursday, 16 September 2021; who is eligible
Next articleCabinet requests that persecution of artist-teacher stops