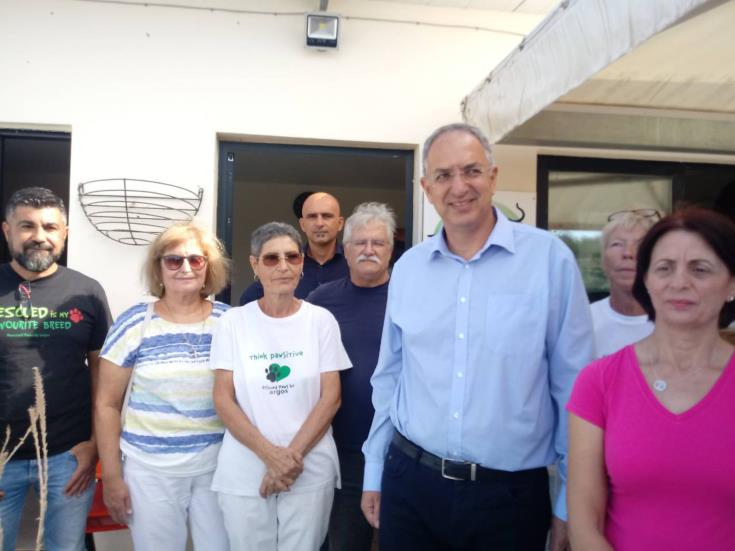 Animal protection and welfare is high on the government’s priority list, said Minister of Agriculture Kostas Kadis during his visit to Argos Animal Sanctuary, in Ormidia.

Kadis visited the sanctuary on October 4, World Animal Day.“With our visit to the sanctuary we want to symbolically remind people, of our obligation to work for the protection and welfare of animals. It is also an opportunity to give credit and express our gratitude to the volunteers who are constantly working in this direction,” he said.

He added that the government recently announced a comprehensive action plan for animal welfare. Under this plan, animal welfare organisations are now receiving double the amount of state funding than they used to, Kadis said.

Also, 800 stray cats have been sterilised under the government’s new cat sterilisation programme.

“At the same time we are also working on the legislative framework. A number of very important pieces of legislation are pending, laws that ensure right conditions and provisions for the sale and possession of animals and pets, laws which regulate the operation of zoos, regulate how we should behave with our pets and outlaw the permanent tethering of dogs among others,” he said.

The Minister concluded by saying that his Ministry is working with the Ministry of Education to raise awareness among the public, especially young people, through specialised programmes.

“The state finally has a concrete strategy to resolve these issues, a strategy that has begun to materialize, and this alone shows that we are on the right track,” said Environment Commisioner Ioanna Panayiotou. She added that “it is very important to change our mindset, start respecting and caring for animals.”

Voice For Animals spokesman Dinos Ayiomammitis thanked the Minister for his visit and noted that “the protection and welfare of animals is not a matter which should concern us only for one day a year, but 365 days, 24 hours a day, and for this to happen, it takes a lot of work from volunteers.”

He added that help from the state and local authorities is needed to achieve concrete results. ‘We welcome the positive steps that have been taken, we thank the Minister and the Commissioner for the initiatives they have taken but much more is needed to be done. ”