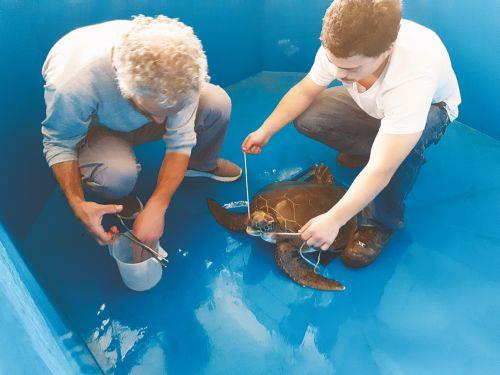 ‘Androniki’ turtle which was rescued by Fisheries Department staff last October is giving her battle for survival and it looks like she will be a winner.

This is what her rescuers told Philenews on Thursday, adding that 2021 will be the year of ‘Androniki’ who is nursed at the Department of Fisheries and Marine Research in Meneou, Larnaca.

She had a broken skull and very serious injuries in one eye and other parts of her body and wings when she was spotted and rescued.

The five to ten years old turtle appears to have been caught in fishermen’s nets while searching for food.

Trapped and unable to react and escape, the people who approached her not only felt no compassion but the actually smashed almost half of her skull and left her there to die.

‘Androniki’ jaws were also broken but two of her rescuers, whom she now recognises, enter her hospital tank daily and patiently and lovingly put small pieces of squid inside. They then help her to chew and swallow the food.

She has stopped being afraid of them and is very calm as she gets food and care as well as vitamins. The staffers hope that Androniki has not lost sight in one of her eyes but they can’t be certain.

Above all, they hope progress on the jaws of the marine reptile will continue and that within 2021 she will be able to return to its natural habitat.