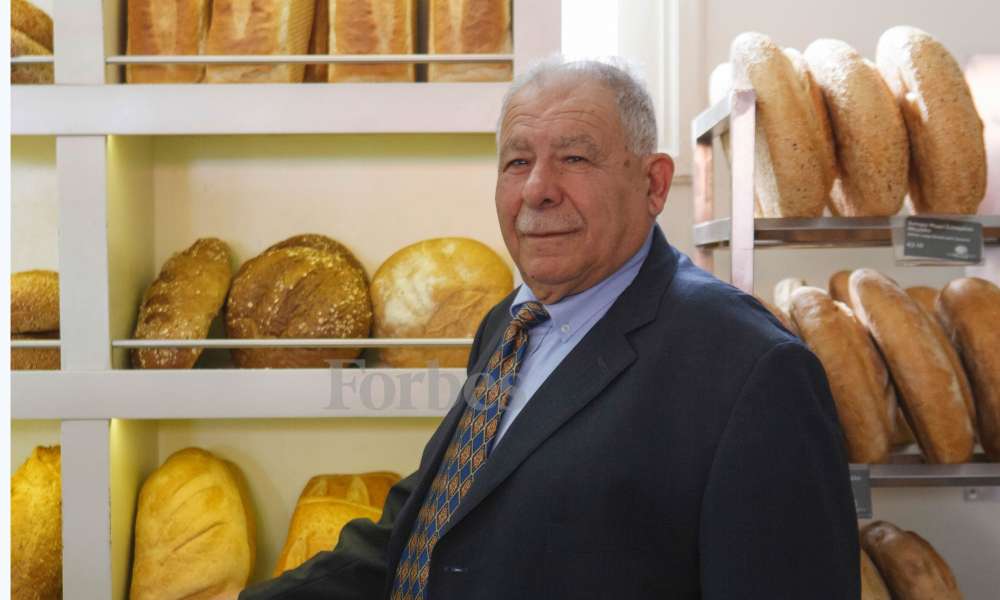 The man behind the well-known bakeries looks back on the history of the Group, from the first bakery to the present, and talks about the company’s future.

Smiling, optimistic and open-hearted, Andreas Zorbas recounts to Forbes how he started with a traditional oven in the garden of his house in Athienou, from his first steps in furniture making, to the making of bread in his own Zorbas bakery. In a rare interview, he talks about his life experience and reveals how he has managed to become a household name.

Carpentry and the war

Andreas Zorbas was born in 1940 into a large family. Aged 17, he opened a carpentry shop in his village in Athienou with his brothers.

Residents would often pay for the furniture made by the Zorbas family with farm animals, such as cows and sheep. Over time, this kind of payment became more frequent and Mr Andreas’ family found itself owning more than 30 cows.

Soon, from furniture-making they started distributing milk and cooperating with the large established dairy companies of the time, which they supplied with milk. “We thought that since we had the milk, we should start transporting it by car. We ended up transporting 200 churns of milk a day.”

As the years by, the farm with the cows grew. “We reached 60 cows and we built a new farm at Pyrroi.” But, as a result of the Turkish invasion in 1974, he lost his farm while business at the carpentry workshop slumped. He decided, besides the milk, to distribute the famous Athienou bread from a baker in the village to two convenience stores at Kophinou, on the Nicosia-Limassol road. The agreement was clear: he would increase the number of loaves sold daily from 150 to 200 and in exchange the baker would teach him how to make the Athienou bread. Within a month, sales rose to 200 and soon after to 230 loaves a day. His fellow villager keeps his side of the agreement and the first stone oven was built in the garden of the Andreas Zorbas family home.

Andreas Zorbas’ home in Athienou is used to make traditional Athienou bread using pure ingredients. The children go to school in the morning and then work at the family bakery. Quickly, Mr Andreas’ Athienou bread became well-known in nearby villages and within a few months, daily production reached 800 loaves. And that’s how it all started.

Today, there are 67 outlets throughout Cyprus and three production units in the Aradippou and Nisou Industrial areas. The group also has two shops in New York. Further, the group offers meals as well as catering services (Zorbas Catering). Also available is coffee under the name Coffee Berry as well as catering services. As regards the patisserie, the group has added Pralina Confectionaries. The coffee shop chain Pralina Experience and the Asian restaurant AKAI, are also part of the group.

Expanding the bakeries needed proper planning and preparation, Mr Andreas insists. “Fifteen years ago, we stood in front a blackboard and exchanged views. We anticipated that we would face tough competition. We had to prepare early.”

“We will add whatever we see missing from the market relevant to the bread business,” Mr Andreas says with optimism. “We want to move forward,” he adds.

The family has maintained the same values. The ‘secret’ of success according to Mr Andreas is kindness and loving others and work.

At the age of 78, his dream has come true. He continues to be active in the group as honorary president of the board, supported by his three sons and one daughter who are also in management.