Anastasiades: No Cyprus solution if treaty of guarantee is still in place 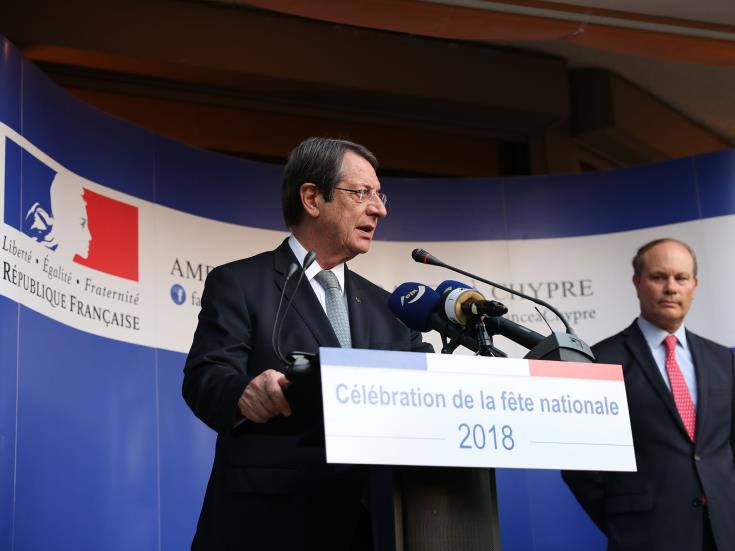 There can be no solution to the Cyprus problem if the anachronistic treaty of guarantee continues remains in place, President of the Republic Nicos Anastasiades has stressed, adding that this is the message he has asked the Greek Premier to communicate to the Turkish President.

“The essence of the message is that to reach a settlement, we have to be fully in line with what the UN Secretary General has ascertained, and that is that the anachrnonistic treaty of guarantee cannot continue, especially when we are talking about an EU member state, ” the President said responding to press questions during a reception to celebrate the French National Day, at the French Ambassador’s residence.

The message which the French Ambassador conveyed in his address at the reception, Anastasiades noted, was also very important. The Ambassador told his guests that “the best guarantee for a reunited Cyprus, an EU member, is Europe.”

The President also said he had not talked to Greek Prime Minister Alexis Tsipras after his meeting with Turkish President Recep Tayip Erdogan earlier today, on the sidelines of the NATO summit. Anastasiades noted that he would converse with Tsipras either later tonight or tomorrow.

Asked about the message he conveyed to Erdogan through Tsipras, President Anastasiades said that “my message is that in order to find a solution we must be fully in line with everything that the UN Secretary General has said, meaning that the anachronistic treaty of guarantees cannot continue, especially in an EU member state.”

President Anastasiades also said that, in a telephone conversation today, he thanked the President of the European Council Donald Tusk because in the joint NATO-EU communique but also in Tusk’s statements, it is made clear that there should be good cooperation with non-NATO members without any exceptions.”

Turkey, a NATO member and a candidate country for EU accession, often raises obstacles to issues that relate to the Republic of Cyprus which Ankara does not recognise.

Lute is expected to be received by President Anastasiades on the 23rd of July. She arrives in Cyprus as a personal envoy of the UN Secretary General with the task to hold consultations with the leaders of the two communities regarding the outcome of their reflections in relation to the stalled peace talks. Lute will also confer with Ankara, Athens and London, the three guarantor powers.

Anastasiades and Tusk also exchanged views on the wider region.