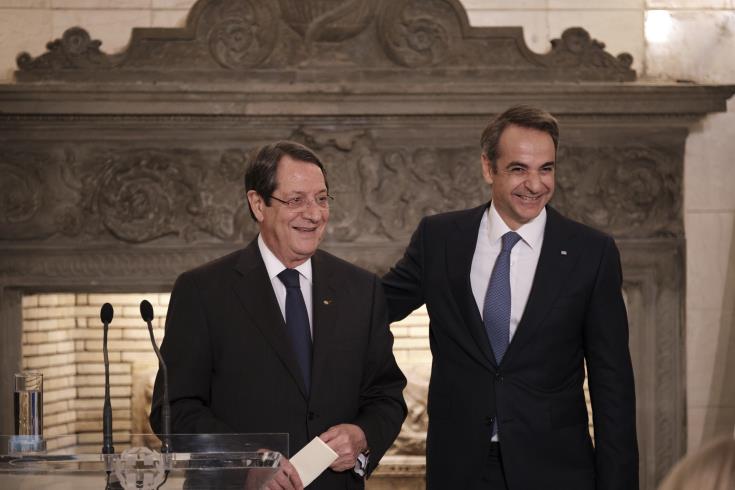 President Nicos Anastasiades and Greece’s Prime Minister Kyriakos Mitsotakishave expressed agreement on Turkey’s provocations in the Eastern Mediterranean, the conversion of Hagia Sophia into a mosque and the EU Recovery Fund.

Their statements came after meeting in Athens, held in the context of an official visit by President Anastasiades to Greece.

During their joint statements following their consultations, Anastasiades and Mitsotakis expressed a complete convergence of views as regards the agenda of discussions, which included the escalation of Turkish provocations in the Eastern Mediterranean, the conversion of Hagia Sophia into a mosque, and the EU Recovery Fund.

Referring to Turkish provocative actions in the region, President Anastasiades said that during his consultations with the Greek Prime Minister both sides agreed that they will not allow Turkey to create an unnecessary crisis. As he said, Turkey’s actions violate international and European law, and are unacceptable for a state which is theoretically an EU accession candidate.

“We are seeking dialogue, peace, and stability,” Anastasiades said while underlining that Greece and Cyprus are being challenged by Turkey’s illegal actions. As he noted both countries are determined to decisively tackle this challenge, while being engaged to the prospect of a substantive dialogue with respect to the international law. Moreover, Anastasiades stressed that Cyprus is asking for a more effective intervention on behalf of the EU.

President Anastasiades referred to the conversion of Hagia Sophia into a mosque as a major provocation, which is incompatible with a secular state. “Hagia Sophia belongs to all people that honour cultural heritage irrespective of religion,” Anastasiades said.

“All civilized citizens must coordinate our actions in order to send the strongly worded message that no one can treat cultural heritage with such impudence,” he stressed.

As regards EU’s Recovery Fund which will be discussed in the forthcoming European Summit, he said that Greece’s and Cyprus’ views are aligned with the majority of EU member-states, who believe that Europe must effectively confront the economic crisis caused by the pandemic.

On his, Greek Prime Minister Kyriakos Mitsotakis said that Greece and Cyprus agree that the European Commission’s proposal for the Recovery Fund must be fully adopted. Europe faces the challenge to respond to this crisis, in line with the principles of solidarity and of fair development, he underlined.

Mitsotakis said that during his meeting with President Anastasiades they reviewed in detail recent developments in the region of the Eastern Mediterranean, under the prism of the Turkish escalating aggressiveness. As he stressed, Greece and Cyprus closely coordinate their actions regarding Turkish provocations, which violate Cyprus’ and EU’s sovereign rights.

“The EU must compile a list of specific sanctions against Turkey,” Mitsotakis said. “We never refused dialogue and good neighbouring relations, but this comes without blackmailing practices and covert threats,” he added.

Referring to Turkey’s decision to turn Hagia Sophia into a mosque, Greek Prime Minister expressed the view that the cultural value of this monument cannot be destroyed, and will remain intact over the centuries. “Greece will answer to this petty and unnecessary initiative on behalf of Turkey,” he said. Greek Prime Minister questioned whether Unesco should continue to grant its limelight to a country that behaves in such a retrogressive way. “We are preparing our reaction on all levels. This symbol of tolerance will not remain at the mercy of political expediency,” Mitsotakis concluded.

Turkish drill ship “Yavuz” arrived last April  in the exclusive economic zone (ΕΕΖ) of Cyprus, after Ankara announced another attempt to drill a well in blocks licensed to European companies. This is the 6th time Turkey attempts to drill within the EEZ and continental shelf of the Republic of Cyprus, this time in an area that covers part of exploration blocks 6 and 7, which have been licensed to ENI and TOTAL.