Anastasiades, May discuss British Bases issue ahead of Brexit 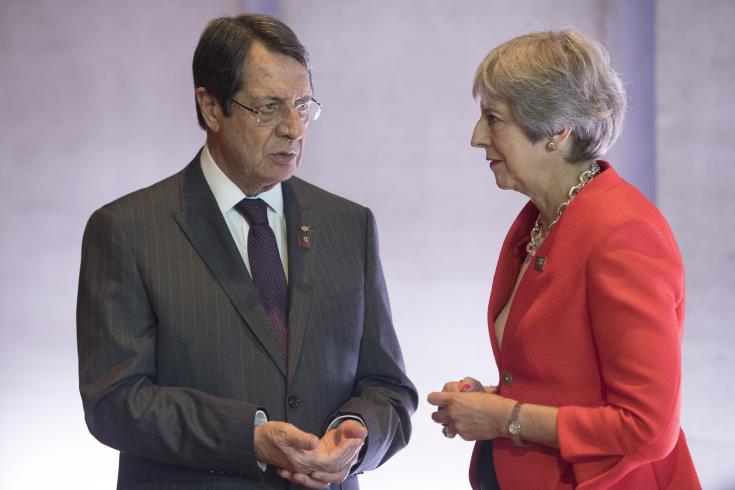 President Nicos Anastasiades held a brief discussion with British Prime Minister Teresa May on the protocol concerning the sovereign British Bases in the island. Their discussion took place on the sidelines of the European Council meeting in Brussels, Government Spokesman Prodromos Prodromou said.

Prodromou said that “the President of the Republic participates in the summit of Heads of State of the European Council,  with an agenda including the issue of immigration, where the President will, of course, underline the particular problems our country is facing during this period because of Turkey`s attitude towards the Republic of Cyprus.”

He added that “the issue of the Multi-annual Financial Framework 2021-2027, which is very decisive for the future of the EU will be discussed” and stressed that “there are still talks on the Article 50 and the exit of the United Kingdom”, Adding that UK Prime Minister T. May is present, “having passed the test in the last few days with the vote in the UK parliament”. He added that “the President of the Republic had an opportunity to have a conversation with Mrs. May specifically on the protocol concerning Cyprus”.

Prodromos Prodromou also said that the Council’s deliberations “will include the internal market matter and issues concerning the EU`s external relations, during which the President of the Republic will convey his concerns after being informed by the President of Serbia, Mr Bouchic, about measures that the establishment of Kosovo is introducing, such as the imposition of tariffs that isolate the Serbian population and the totally irregular and out of every deal intent to build an army. ”

The Government Spokesman stressed that the President of the Republic will underline that the focus of the Union on Balkan’s should be maintain.

He also noted, “the forthcoming EU-Arab countries summit and the role played by Egypt in this relationship is of particular interest, and it is something that interests our country in particular.”

Invited to clarify the Cypriot concerns as regards finance of the EU budget, the Government Spokesman stressed: “It is a matter that is under discussion, of course, by our own diplomatic service, the Ministry of Foreign Affairs on a permanent basis and the President of the Republic whenever he is in the Council”.

“We have the concern and care to maintain the balance”, he explained. “It will be a new environment, after the departure of the United Kingdom, the important policies of the Union should be maintained, but also a fair distribution of burdens and responsibilities should be safeguarded,” he concluded.