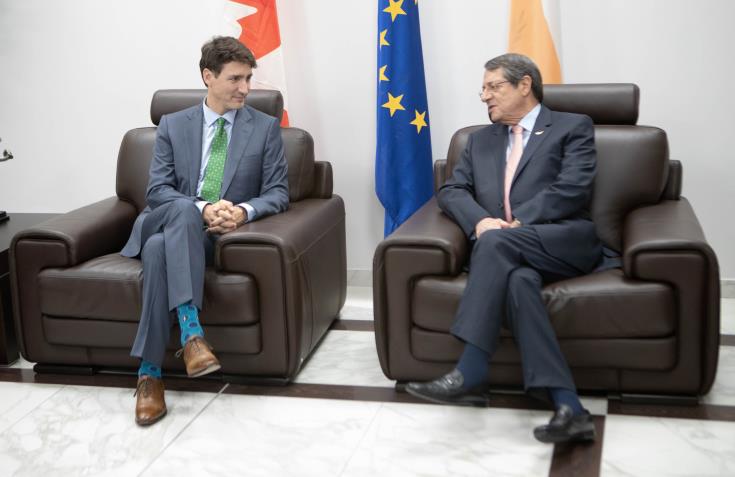 President Anastasiades had a meeting on Monday evening with Canada`s Prime Minister Justin Trudeau in the old Larnaka airport, where the latter had a layover on his way to Asia from France, during which they discussed the Cyprus problem and regional and international developments.

President Anastasiades briefed the Canadian Prime Minister on the latest developments in the Cyprus problem and on the process which is beginning now under the UN Secretary General`s auspices and thanked him about the principled position of Canada on the Cyprus problem, a presidency press release said.

CNA has learned that Trudeau expressed his interest in developments on the Cyprus problem and President Anastasiades outlined the new effort which is underway, referring briefly to the outcome of the Crans-Montana Conference on Cyprus in the summer of 2017.

They also expressed their governments` common will for the two countries to have even greater cooperation in international fora.

The two leaders agreed on the need to have a multilateral approach to current problems worldwide and to further enhance cooperation between Cyprus and Canada on an international level, as well as to stregthen bilateral relations, a source said.

Furthemore, it noted that the Canadian Prime Minister had a positive reaction to the invitation extended to him by President Anastasiades to pay an official visit to Cyprus .

By In Cyprus
Previous articleFund Management “part of the new beginning” for Cyprus, FinMin says
Next articleStan Lee, creator of Spider-Man and other Marvel superheroes, dead at 95