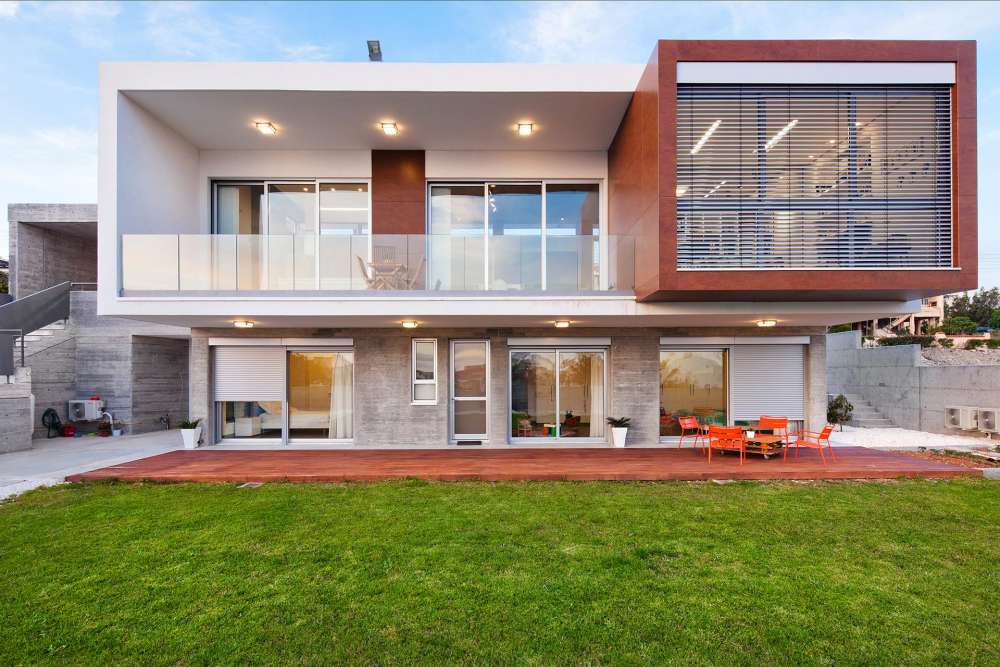 The existence of two rather commonplace materials, cement pipes and sheet metal, on the site where the house was later built on in Paphos was what gave the idea for its design.

These materials were “transported” to the metal frame, coated with metal and glass, and to two walls of cement pipes that surround the house. The first shell includes the metal frame, placed on a traditional base. Then, Envelope 3D, an innovation by the Rabel Company, was implemented. External aluminum and double glazed walls, operational and fixed windows, and even the entrance, are parts of the system, which was installed on a continuous 76-meter channel without additional frames. Consequently, it provides thermal insulation without thermal bridges. The internal walls consist of a drywall system, while the roof is covered with sheet metal. This shell encompasses the interior of the house, allowing unobstructed view from the inside to the outside.

Ιn other words, the house is like a Russian doll that hides another doll. The layout of the spaces develops linearly with a single united seating, dining and kitchen area. Three bedrooms and one office are placed in a row, connected to the corridor-gallery along them. The corridor opens to the south with large sliding windows and connects to a wooded terrace, which is interrupted by small areas planted with trees and aromatic plants. Towards the north, an aquatic corridor comes into contact with the house and large windows from all areas are open to it. The water from pool changes the sonic landscape as well as the lighting, since light is reflected in the interior changing the overall ambience. All these are enclosed in walls made out of cement pipes, which make the house strong against the wind.