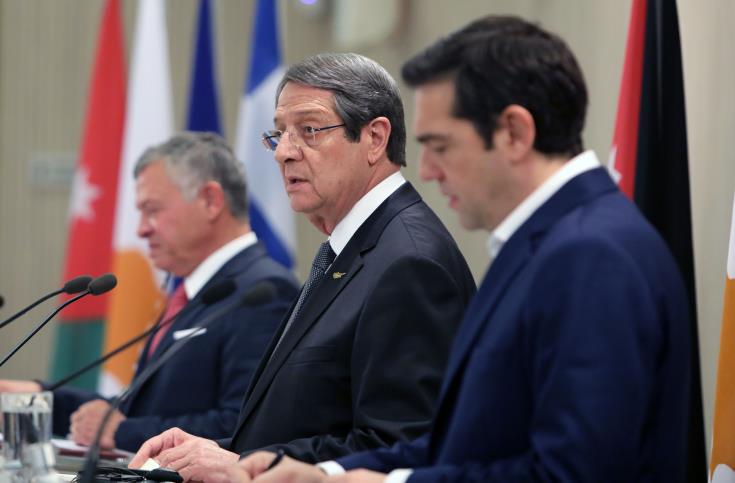 According to information, a Trilateral Summit among Cyprus, Greece and Palestine will probably take place in April as well, in Athens.

Moreover, on April 10 a Trilateral meeting among Cyprus, Greece and Lebanon,  is scheduled to take place, at the foreign ministers’ level, in Beirut.

Meanwhile, Cyprus President Nicos Anastasiades is scheduled to pay an official visit to Georgia on April 16 -18. During his meetings with Georgian officials the President is expected to discuss the Cyprus issue, EU-Georgia relations and regional matters.

During their first Trilateral Summit last year, the leaders of Cyprus, Greece and Jordan decided to establish a trilateral partnership and agreed on its guiding principles, stressing that the three countries’ partnership is not exclusionary, nor directed against any country and that it is established on the basis of full respect of international law and of the purposes and principles enshrined in the Charter of the United Nations, the UN Security Council Resolutions, including commitment to good neighbouring relations, international peace and security and respect for the sovereignty, independence and territorial integrity of states.

By In Cyprus
Previous articleUpdate: Man who threatened to set himself on fire on Larnaca rooftop persuaded to come down
Next articleCircular economy and sustainable mobility models discussed at Nicosia conference