AmChams of Cyprus, Greece and Israel sign MOU in Nicosia 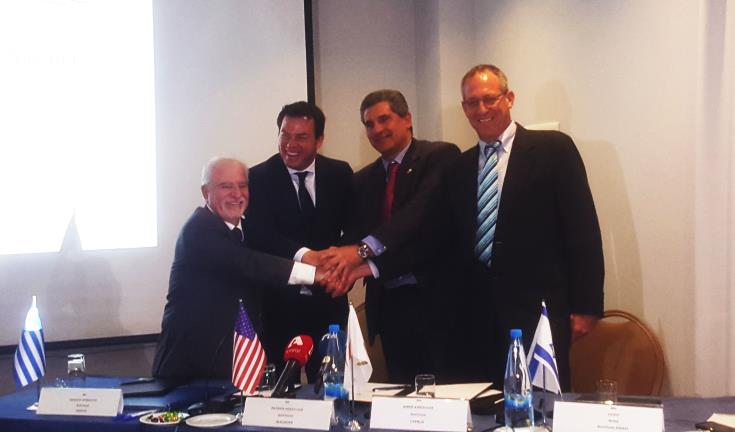 American Chambers of Commerce of Cyprus, Greece and Israel signed in Nicosia a memorandum of understanding (MoU), aiming to create a stable business environment that will also serve American businesses operating in the region.

The areas in which the three AmChams see more opportunities for cooperation are energy, shipping, financial services, innovation and technology.

Speaking at a press conference following the 1st Regional Meeting of AmChams of the three countries at the initiative of the Cyprus Chamber of Commerce (AmCham Cyprus), its president Haris Kakoulis said that the aim was to promote cooperation between the three chambers, following the example of the three governments of the countries that want to create an environment of stability in the region for economies, businesses and US businesses.

“The aim is in the future to have a continuous communication between us in order to be able to promote the interests of our own states, our businesses and our members,” he said. He also spoke on the importance of building an ecosystem for promoting entrepreneurship and innovation, with the support of the three governments.

Vice President of AmCham Greece Marios Kyriakou said that there were common goals and that each chamber could benefit from the experiences of the other two. He also said that there’s a lot of interest from Greek companies to invest in Cyprus especially in the sectors of construction and shipping. As he said, there’s an increased activity and “we will see much more in the next years”.

On behalf of the AmCham Israel Oded Rose said that regional and international cooperation, in business brings people together and it’s a stabilization factor to the regions. He also said that he saw the most cooperation opportunities in the sectors of energy, shipping, transportation and financial services. He added that there were a lot of opportunities in the fields of innovation and technology.

Chairman of AmCham in Europe Patrick Mikkelson said that the MOU was a great initiative of the AmCham Cyprus and that it could benefit the chambers of three countries with internationally oriented economies.

By In Cyprus
Previous articleNew pictures of Aphrodite the seal
Next articleU.S. sends food, medical supplies to Colombia-Venezuela border