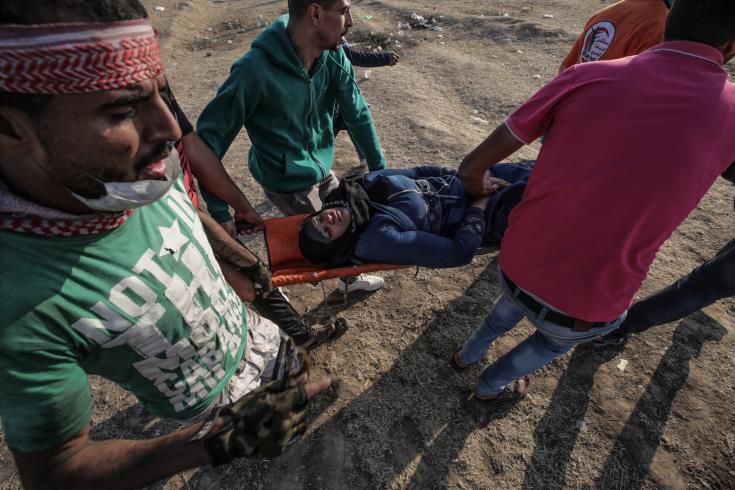 The Ambassadors of Israel and Palestine in Cyprus both uphold, in statements to CNA, that their respective side’s actions and positions, with regard to the recent violent clashes in Gaza and the Israeli-Palestinian conflict in general, are based on the international law.

Shmuel Revel’s and Jubran Taweel’s statements on the escalation of the tension, as the US opened its Embassy in Jerusalem, illustrate the vast gap between the two sides. The former said that “the people of Gaza are victims of the Hamas regime” and that “the Palestinians and Hamas are the entities people should blame when they lament the fate of Gaza,” while the latter noted that Palestinian civilians at the Gaza border are “attacked and murdered by the Israeli occupying forces”, while exercising “their legitimate right of protest against this inhumane and absolutely illegal occupation.” Furthermore he denounced the US administration`s stance, noting that the US is now “art of the problem, and not the solution.”

In his statement to CNA, Ambassador of Israel Shmuel Revel said that “the international community must realize that the Gaza violence is the direct product of Palestinian choices, led by Hamas, which is recognized by the EU as terror organization. Hamas seeks Israel`s destruction and deliberately targets Israel`s civilian population to advance that objective,” he noted.

Revel said that “the people of Gaza are victims of the Hamas regime that puts its extremist ideology above and beyond the interests of the people. Palestinians in Gaza suffer from an economic and social disaster, following Hamas`s governance. International aid abounds, yet Hamas leaves its people unemployed, cities and facilities undeveloped, and moreover uses its people in a cruel, coldblooded way, as human shields in attacks against Israel,” the Ambassador noted.

As he said, “in the last weeks, tens of thousands of Palestinians took part in violent riots at the Gaza border, constituting a major threat to Israeli civilians and land.”

“These were not Gazan civilians seeking to peacefully protest for a better life. We know this because, even within Gaza, Gaza’s residents aren’t allowed to assemble and protest without Hamas’s permission. These people were extremists, violently storming the border to infiltrate Israel and kill as many Israeli civilians, living in village communities adjacent to the border fence,” he noted, stressing that “Israel cannot let this happen. Israel is protecting its population from terrorists, not protesters.”

“To actually understand the events, one has to go beyond the numbers of Palestinian casualties, that the media focus. It isn’t Israel which is seeking or initiating the confrontations at the Gaza fence. It`s Hamas. The Palestinians and Hamas are the entities people should blame when they lament the fate of Gaza,” Revel noted.

Furthermore he said that “in order to avoid such horrible events taking place in the future, the international community should exert pressure on the Palestinians and Hamas to stop ignition of the violence against Israel and decrease the tension.”

“We feel sorrow for the loss of human lives, in this totally avoidable tragedy,” Revel said, noting that “actions carried out by the security forces are in accordance with international law and efforts are taken to reduce casualties.

On his part, Palestinian Ambassador Jubran Taweel told CNA that “the escalation of Israel’s aggression against the Gaza Strip, where unarmed Palestinian civilians at the Gaza border exercising their legitimate right of protest against this inhumane and absolutely illegal occupation continue to be wilfully attacked and murdered by the Israeli occupying forces, threatens to further destabilize the situation on the ground and to ignite yet another round of deadly violence by Israel.”

“We call on the international community, with the United Nations Security Council at the forefront, to act immediately in accordance with their Charter obligations and international humanitarian law to address this deepening crisis and prevent the complete destabilization of this situation,” he noted.

He added that the State of Palestine considers the participation of representatives of some countries, including EU member states, in the inauguration activities an act of hostility against Palestinian rights and international law.

Taweel pledged that the Palestinian leadership “will continue to pursue all available legal and diplomatic avenues to defend our people`s rights from Israel`s entrenched regime of colonization and aggression as well as states that defend and sponsor this regime of oppression.”

“This is also is an international responsibility. The international community has an obligation to defend the standing of international law and the integrity of the international order as they relate to Palestine. The rights of the Palestinian people to self-determination, freedom, and sovereignty are fundamental and non-negotiable. States that proclaim to support these inalienable rights must act accordingly,” he said.

Taweel noted that “the US administration is acting on its arrogance of power and disdain for Palestinian rights, thus reaffirming that it is now part of the problem, not the solution.”

As he said, “the inauguration of the US embassy on 14th of May 2018 in occupied Jerusalem is an act of hostility against Palestinian national rights and international law. It is an assault on the standing and integrity of the international order, including the United Nations.”

The Palestinian diplomat also stressed that “states that have announced their intention to follow in the illegal footsteps of the US, position themselves in the ranks of states that threaten international law, violate Security Council resolutions, and are thus agents of conflict, not peace. Jerusalem shall remain the eternal capital of Palestine.”

He also urgently called on the Security Council to act now and make its voice heard, to stop “the carnage being perpetrated against our people, particularly now at this moment in the Gaza Strip.”

“The Council must act on its responsibilities under the Charter to ensure respect by Israel, the occupying Power, including of the Geneva Convention relative to the Protection of Civilians in Time of War in the Occupied Palestinian Territory, including East Jerusalem. This is an urgent matter, and is central to preserving international rules, norms and moral standards in all cases and to saving innocent civilian lives and preventing the collapse of this situation so as to salvage whatever slim chances for a just peace may remain,” the Palestinian Ambassador said.

He also noted that the Palestinians “deeply value the principled stands of the Government of the Republic of Cyprus with the Palestinian People and their support of the urgent need to apply all international resolutions for reaching a just and lasting peace for the Cyprus problem and the Palestinian- Israeli conflict which would lead to more secure and stable world.”