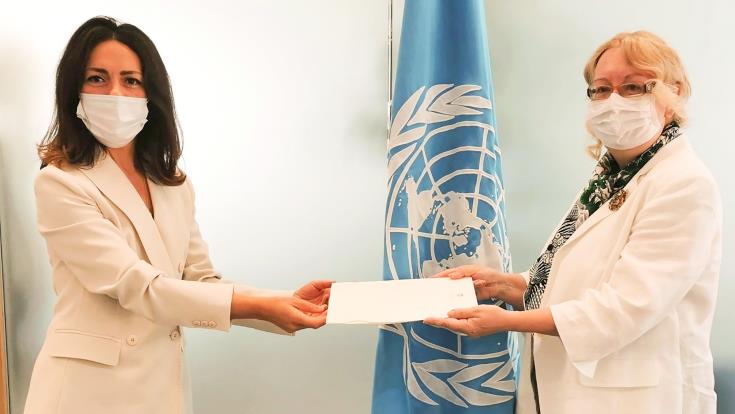 Ambassador Olympia Neocleous has become the first woman to be appointed, Permanent Representative of Cyprus to the UN in Geneva since the opening of the Cyprus’ mission office in Geneva in 1970.

According to a press release issued on the Foreign Ministry’s website, Ambassador Olympia Neocleous presented her credentials to the Director-General of the United Nations Office in Geneva (UNOG), Tatiana Valovaya, as Permanent Representative of the Republic of Cyprus, at a special ceremony held on 22 July 2021, in the Palais des Nations.

Welcoming the new Permanent Representative of Cyprus  Valovaya referred to UNOG`s wide range of activities of the UN Office in Geneva, as well as to ongoing initiatives in its areas of responsibility, including the promotion of the 2030 Agenda for Sustainable Development, as well as to gender equality and the strengthening of the role of women.

On her part, Ambassador Neocleous thanked the Director-General for the information and reaffirmed the full support of the Republic of Cyprus towards UNOG`s initiatives.

She also briefed Valovaya on the latest illegal and provocative activities of Turkey in relation to the fenced area of ​​Varosha, which constitute a blatant violation of the relevant UN Security Council resolutions and aim to create new faits accomplis that will negatively impact the efforts of the UN Secretary-General for the settlement of the Cyprus problem on the agreed basis of a bi-zonal bi-communal federation.

Neocleous becomes the first woman to be accredited as Permanent Representative of Cyprus since the establishment of the Permanent Mission of the Republic in Geneva in the 1970s.