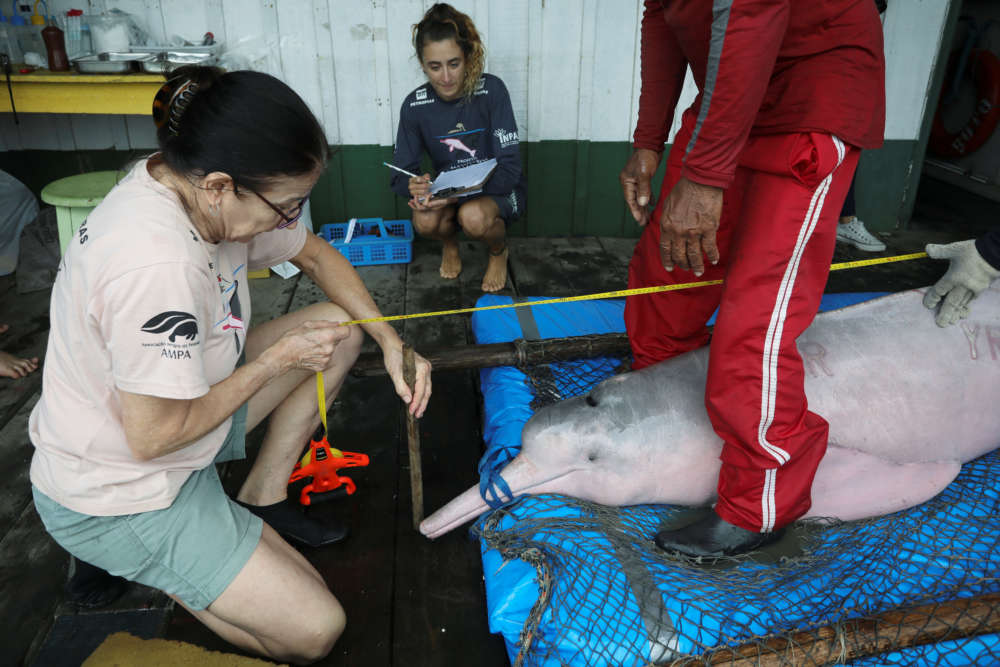 The Amazon river dolphin is an intelligent and friendly mammal that appears to grin and flush like a human blushing when it gets excited.

But some are concerned about the world’s largest freshwater dolphin coming under threat again in Brazil, where fishermen hunt and kill it illegally to make bait for a catfish called piracatinga.

A legal moratorium on fishing the piracatinga ended last month, prompting calls for its renewal from environmentalists and researchers such as biologist Vera da Silva, who has worked to preserve the so-called pink river dolphins for 25 years.

“I never stop being amazed by them. They are fascinating animals,” Silva said as her team used a net to bring in dolphins to be examined, measured, marked and released again in the Mamirauá Sustainable Development Reserve.

“We captured a dolphin mother and her calf today and saw them calling out to each other. They have a very strong relation until the calf becomes independent after three years,” she said.

Like others dolphins, they make whistling sounds through blowholes to communicate underwater.

What sets them apart is a slow transformation from gray to pink as they age. Behaviour and exposure to sunlight also influence colour changes in the “boto vermelho” or “red dolphin,” as the creatures are known in Brazil. They can turn as bright pink as a flamingo.

Their active courting and mating gave rise to a legend in the Amazon that the pink dolphin morphs into a handsome man at night to seduce village women.

The Mamirauá reserve, run by the Amazon research institute INPA, spans 11,000-square km (4,300-square miles) of flooded rainforest and wetlands and is located three days up the Amazon by boat from Manaus, the capital of Amazonas state.

With their elongated beaks tied carefully, the dolphins are brought to a floating research center in the Mamirauá reserve, where members of Silva’s team take blood samples and use a syringe to suction milk from dolphin mothers for testing.

A dolphin’s pregnancy typically lasts 13 months and then it feeds a calf underwater for two years. Due to the long nursing period, females only reproduce every three to five years, Silva said.

That makes them more vulnerable to extinction if their population is depleted. Prosecutors in Amazonas state, who asked for the catfish ban in 2015, warned then that as many as 2,500 dolphins were being killed each year for bait.

Though they are relatively abundant, and found across South America’s vast Amazon and Orinoco river basins, Silva fears the Amazon dolphins could disappear like the Yangtze river dolphin did in China in 2006, following years of overfishing and pollution.

“We don’t want the dolphins to become just a legend of Amazonia,” Silva said.

By In Cyprus
Previous articlePaphos: €800 fine, 5 points for speeding in residential area
Next articleSuspended prosecution does not necessarily mean innocence, says AG