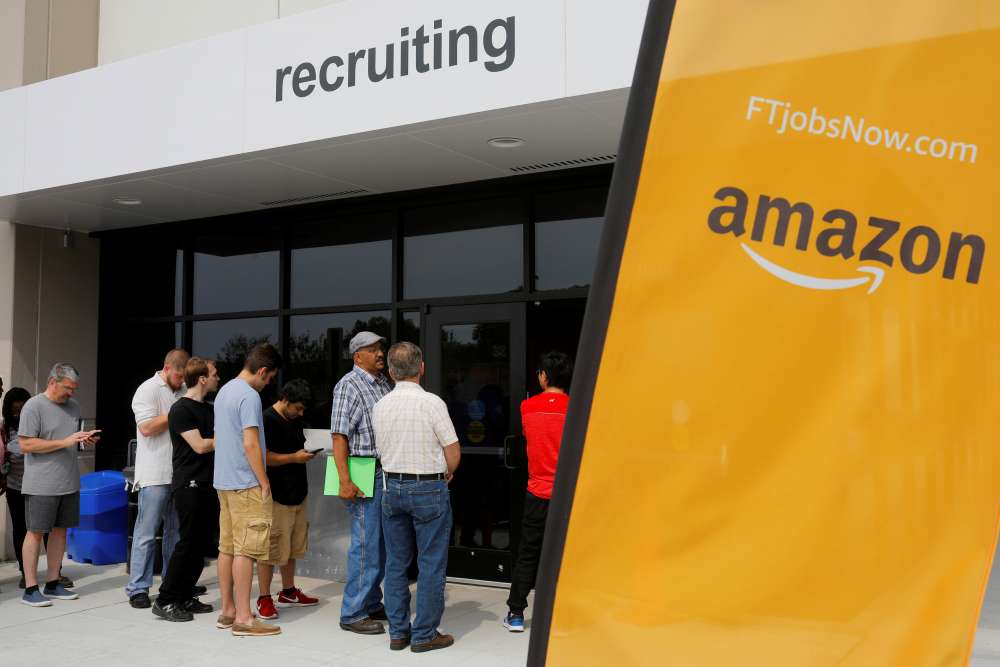 Amazon.com Inc said on Tuesday it would raise its minimum wage to $15 per hour for U.S. employees from next month, seeking to head off criticism of working conditions at the world’s second most valuable company.

The online retailer said it would now lobby in Washington for an increase in the federal minimum wage and urged its competitors to follow its lead as the union-led “Fight for Fifteen” movement pushes for higher remuneration.

The new minimum wage will benefit more than 250,000 Amazon employees in the United States, as well as over 100,000 seasonal employees who will be hired at sites across the country this holiday, the company said.

“We listened to our critics, thought hard about what we wanted to do, and decided we want to lead,” founder and Chief Executive Jeff Bezos said in a statement.

“We’re excited about this change and encourage our competitors and other large employers to join us.”

Amazon, which became the second company after Apple to cross $1 trillion in market value last month, paid its U.S. employees on average $34,123 last year. Bezos is listed by Forbes as the world’s richest man with a net worth of nearly $150 billion.

Amazon’s current minimum hourly wage starts at around $11 and analysts said the raise would cost it $1 billion or less annually and be offset by a recent $20 increase in the cost of Prime memberships.

Higher wages could further pressure margins at retailers that are already getting squeezed by higher transportation and raw materials costs, but the $15 still compares unfavourably with average U.S. blue collar wages.

Bureau of Labour Statistics show ordinary workers in the U.S. private non-farm sector on average earn $22.73 an hour. The mean hourly wage for non-management workers in transportation and warehousing is $21.94.

Amazon shares, trading lower before the company announced the wage hike, were down less than 0.3 percent at $1,997.75 in trading before the bell.

Workers have been protesting against fast food chains like McDonald’s Corp and demanding wage increases since 2012 but conditions at Amazon’s warehouses, distribution centres and for its couriers have been drawing media attention and criticism for some time.

“The pay increase puts Amazon ahead of the curve when it comes to providing its employee a living wage,” D.A. Davidson analyst Thomas Forte said, adding that the move will help it to attract employees as it opens more brick-and-mortar retail stores.

The company, which bought Whole Foods Market in a $13.7 billion deal last year, opened a general store in New York City in September after launching a few small grocery shops known as Amazon Go in Seattle and Chicago.

Amazon said it would increase its minimum wage for all full-time, part-time, temporary and seasonal employees.

Amazon also raised its minimum wage in Britain to 10.50 pounds ($13.59) an hour for all employees in the London area and 9.50 pounds an hour for staff in all other parts of the country, effective from Nov. 1.

“We will be working to gain Congressional support for an increase in the federal minimum wage. The current rate of $7.25 was set nearly a decade ago,” said Jay Carney, senior vice president of Amazon global corporate affairs