All passengers rescued after plane overshoots runway in Micronesia (video) 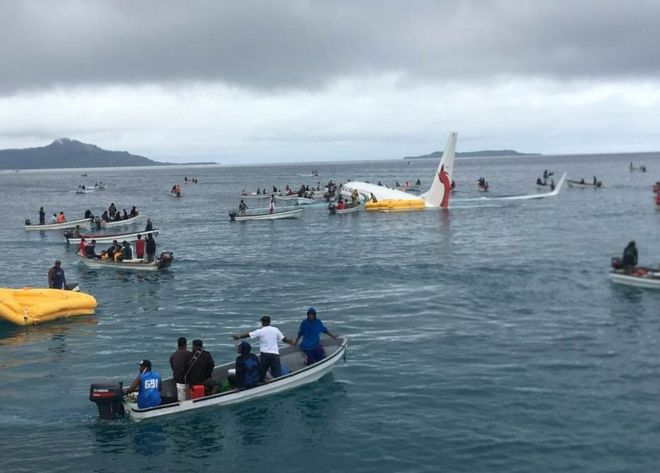 A passenger aircraft came down, this morning, in a lagoon off Chuuk International Airport in Micronesia after it overshot the runway, say airport officials.

None of the 35 passengers and 12 crew onboard flight ANG73 suffered serious injuries.

The cause of the crash is unclear, but investigations are due to begin soon.

“The plane crashed in the lagoon, about 160 yards away from the runway,” Chuuk airport manager Jimmy Emilio told the BBC.

“Right now we don’t really know what happened. Investigations will start earliest tomorrow, but [for now], operations are starting again as usual in the airport.”

Mr Emilio said all those onboard the Boeing 737-800 aircraft were taken to hospital for checks, saying he believed some suffered from “minor injuries.”

No casualties. 35 passengers of #AirNiugini flight to #FSM that crashed into the sea in Chuuk have been evacuated to safety and taken to hospital. The flight was landing. pic.twitter.com/5nTOQZpin8

The aircraft was flying from the island of Pohnpei in Micronesia to Port Moresby, the capital of Papua New Guinea, stopping at Micronesia’s Weno island on the way.

Matthew Colson, a Baptist missionary on the island, said it had been raining but was not windy when the plane landed. Colson, who has lived on the island for most of his life and runs a radio station, spoke with residents and officials in the aftermath.

Passengers included a small number of locals alongside predominately US and Australian passengers, he said.

The plane crashed into the water near a market where fishers had come in to sell their catch. “They just went straight out there and started hauling people to shore,” Colson said.

Air Niugini had only recently begun flying that route with the larger Boeing planes, Colson said.

“United is mostly the only airline that comes out here, and it’s been that way for years … There are flights every day but this has never happened before. Mainly because this route is considered one of United’s hardest routes for the 737, so they … send their best pilots out here for the island hopper.”

Colson also interviewed one of the passengers, Bill Jaynes, a journalist based in Pohnpei.

“It was surreal,” Jayne said in a video posted to Facebook. “I thought we [just] landed hard until I looked over and saw a hole in the side of the plane and water was coming in, and thought, ‘This is not the way it’s supposed to happen.’”

“We came in low, very low. Unfortunately the flight attendants panicked and started yelling. I was trying to be calm and help as much as I could.”

Jayne said he wasn’t seriously hurt but there were some “pretty severe injuries” among other passengers.

“I was really impressed with the locals who immediately started coming out in boats. One might think they’d be afraid to approach a plane that just crashed … [but] they were awesome.”