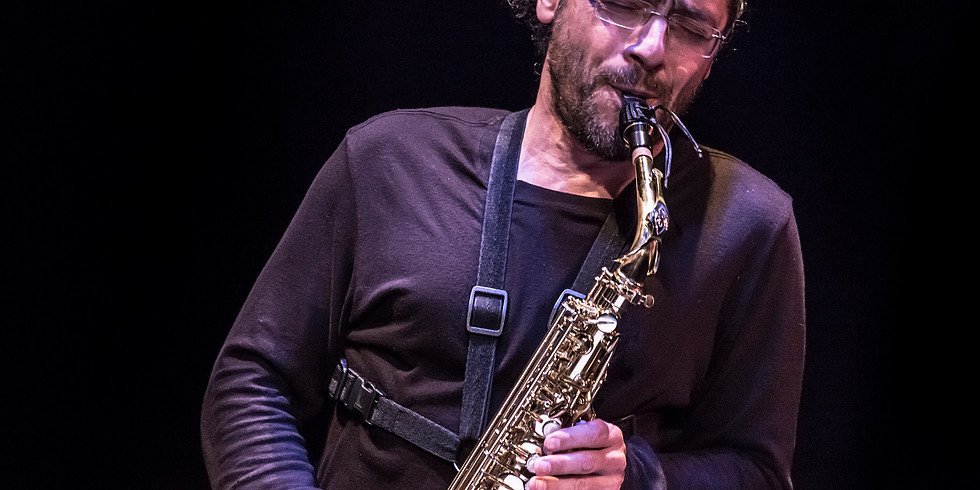 Inspired by the bicentennial of the beginning of the Greek revolution, Alkman Saxophone Quartet attempts to encompass five centuries of Greek music through the unique sound structure of the saxophone quartet.

‘Five centuries of music in blue and white: From Leontaridis to Koumentakis and Glass’

Inspired by the bicentennial of the beginning of the Greek revolution, Alkman Saxophone Quartet attempts to encompass five centuries of Greek music through the unique sound structure of the saxophone quartet. Specifically, the relatively unknown Greek composer from the Renaissance Francesco Londarit detto il Greco – the first known Greek composer of modern times according to Nicolaos Panagiotakis – is in converses with the contemporary emblematic composer Giorgos Koumentakis. Their connecting link is Crete as their common place of origin and a cradle and crucible of civilizations, as well as the arranging skill of saxophonist and composer Giorgos Daravelis.

Moreover, this conversation is strengthened by encompassing Asia Minor and Cyprus through Daravelis’ Asia Minor Suite and Forgotten Heroes (world premiere), written for the unknown Greek heroes who fought at the Turkish invasion of Cyprus in 1974, as well as Dancing with the sax of Cypriot composer Michalis Andronikou. Finally, through the presentation of Saxophone Quartet by renowned American composer Philip Glass, the quartet attempts to connect Greek musical traditions with the contemporary art music, as well as Greek music elements from the “old world” with the new world at the other side of the Atlantic.

The newly established Alkman* Saxοphone Quartet is founded as a partnership between Greek and Cypriot saxophonists: Christos Zenios (soprano sax), Giorgos Daravelis (alto sax), Theofilos Sotiriades (tenor sax), Yiannis Miralis (baritone sax). All members are well-known soloists and music educators with rich and diverse artistic careers. The aim of the quartet is to promote classical saxophone in the Eastern Mediterranean through performing and commissioning of authentic works for the medium.

*Alkman (sic) or Alcman (end of 7th cent. B.C. – c. 612 B.C.) was a Lydian or Ionic choral lyric poet, who shaped choral poetry in Sparta as a unique literary form.

Dancing with the sax, Michalis Andronikou

Christos Zenios (soprano saxophone) was born in 1991, in Strovolos, Nicosia. At the age of 6 he started accordion lessons and at the age of 16 he attained a Diploma in Accordion from “Thales” Music School of Greece with Distinction. At the age of 12 he started piano lessons and a few years later he started saxophone lessons. He holds a BA in Music (Popular Music and Recording) with First Class Honours from the University of Salford, Manchester specialising in composition and saxophone performance, and an MA in Music Performance with Distinction, specialising in saxophone, during which he enrolled in music psychology and ethnomusicology classes, among others. He has been a member and director of several ensembles, (sax quarters and choirs, jazz quartets, wind ensembles, contemporary music groups and more). He took part in concerts in Cyprus and the UK (Manchester Art Gallery Ensemble, Tempo a Tiempo, Chorlton Arts Festival and Royal Exchange Theatre in Manchester, Salford Sonic Fusion Festival etc.) Since September 2016 he has been working as a saxophone teacher in the Music Schools of Paphos and Nicosia.

Giorgos Daravelis (alto sax) was born in Athens. He studied saxophone, music theory, counterpoint and composition at the Athens Conservatory from which he graduated with distinction and the 1st prize in composition. He continued his saxophone studies at the graduate level at Gratz University in Austria, where he studied with P. Straub and Joh. Kawrza. He collaborated with the German composer Bernhard Heiden in 1996 and various other composers such as Di Marino, Melloni, Visser, Castillo, Wynne, Constantinides, Nicolau, Archontidis have dedicated works for him. He has collaborated with many orchestras in Athens and he was a member of the Orchestra of Colors of Manos Hadjidakis for many years. As a soloist he has presented works by Ibert, Glazunov, Nicolau and his own compositions in various European cities. As a composer he has written symphonic and chamber music, as well as jazz arrangements and popular songs. Renowned musicians such as trumpetists Ivano Ascari and Socratis Anthis, Trio Aedon, Duo Montagnard and others has recorded his compositions.

Theofilos Sotiriades (tenor sax) was born in Thessaloniki and graduated from the Faculty of Psychology of the Aristotle University of Thessaloniki. He studied classical saxophone with distinctions in Greece (State Conservatory of Thessaloniki), in France (National Conservatory of Creteil, Paris) and he got his master’s degree from Bowling Green State University in USA. The development and diffusion of the “Hellenic” saxophone is the main concern of his artistic and pedagogical activity expressed through extensive recordings, official participation in International Music Festivals and scientific research (doctor candidate of Macedonia University). Distinguished contemporary Greek composers have dedicated some of their works to him and he performed their world premieres. He has a teaching position at the State Conservatory of Thessaloniki and the Municipal Conservatory of Thermi. For more info please visit www.theofilossotiriades.com

Yiannis Miralis (baritone saxophone) is Associate Professor of Music Education and Saxophone at European University Cyprus. He completed his basic and advanced studies in music (BM, MM & PhD) and has given numerous chamber music recitals in Cyprus, Greece, Italy, Spain, Switzerland, Sweden, Serbia, Germany, the Netherlands, Lebanon, Canada and the USA. He has appeared as a soloist with the Ensemble Philharmonia, the Cyprus Symphony Orchestra and the Macedonian Saxophone Quartet. As a member of the renowned Transcontinental Saxophone Quartet, he is winner of various chamber music competitions in the USA. The quartet appeared as soloists with the Royal Belgian Airforce Band, while their CD “Mountain Roads” has received enthusiastic reviews. He is also founding member of the Mediterranean Trio with whom he appeared in Munich, Bonn, Berlin, Amsterdam and Nicosia. In addition to his performing activity, he is also the conductor of the Symphonic Band of Strovolos Municipality-European University Cyprus, with whom he performed in Greece, Malta and the Seychelles. Miralis has taught at the University of Cyprus and the University of Windsor. From 2001-2004 he served as assistant professor at Lionel Hampton School of Music at the University of Idaho. He is founding member of the Greek and Cypriot Saxophone Associations, board member of the European Chamber Music Teachers Association (ECMTA) and Chair of ISME’s Forum for Instrumental and Vocal Teaching.