Akrotiri and Larnaca Airport at risk of sinking 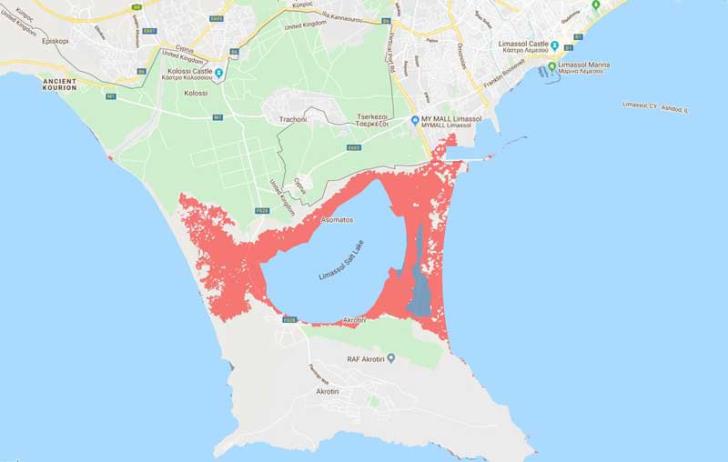 A study by the Climate Central Organisation indicates the areas that will be covered by water over the next 20 – 80 years. In Great Britain, for example, parts of Liverpool and London are expected to disappear. In Cyprus, the biggest problem occurs in the Akrotiri area and also at Larnaca Airport, much of which is expected to be covered by water.

Climate Central’s study shows that vast areas of the world are very likely to be completely submerged within the next 80 years. Rising sea levels are attributed to climate change, which causes ice to melt.

Greece will not be left untouched either. A large section west of Thessaloniki will sink, as will the entire area where the ‘Macedonia’ Airport is located. In the study, we also see sections in Mesolongi, Nafpaktos, Arta and Kalamata below sea level.

Elsewhere, things are much, much worse, such as in Vietnam, which is expected to be completely off the map by 2050.

Dr Scott Kulp, a senior scientist at Climate Central and lead author of the study, said, however, that it is not too late to avoid this devastating and depressing scenario.

“These estimates show what climate change can do, so that we can revise certain things from now on and reshape cities, economies, coastlines and entire world regions during our lifetime. Now, not tomorrow. Soon nations will be called upon to face this problem,” he said.

The study found that, within three decades, chronic flooding could affect areas where a total of 300 million people live. The coastal parts of Asia are at high risk (such as Vietnam, mentioned above) and, by the end of the century, areas that could accommodate 200 million people could be permanently beneath the tide.

The study concludes: “Large and immediate cuts in global gas emissions would reduce the risk posed by rising seas. Such cuts will reduce the total number of people threatened by annual floods and permanent floods by the end of the century by 20 million compared to the moderate emissions cuts made under the Paris Agreement. ”

And he adss: “If governments seek to limit the future impacts of ocean flooding, they could also avoid new construction in areas with high flood risk, while protecting, relocating or even abandoning existing infrastructure. Rising sea levels are an inherent danger: Today’s communities must make choices not only for future generations, but for themselves as well.”