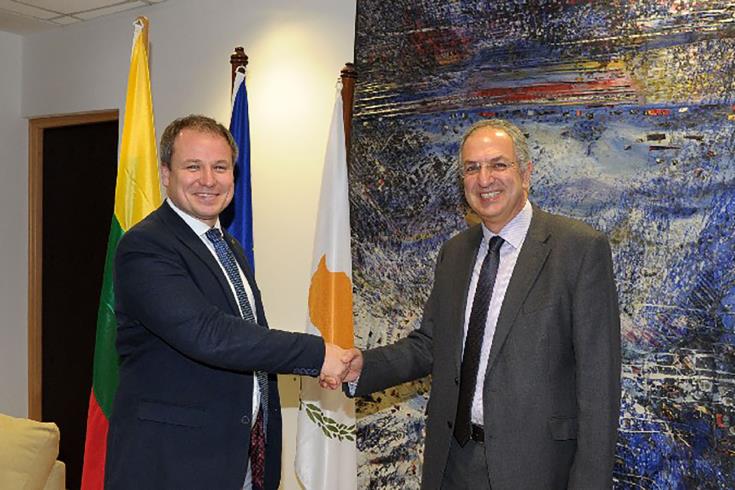 The new Common Agricultural Policy (CAP) was the focus of a meeting between Agriculture Minister Costas Kadis and his Lithuanian counterpart Giedrius Surplys, who is on a working visit to Cyprus.

According to  a press release issued by the Press and Information Office, the two Ministers held a separate meeting,  followed by consultations with the participation of delegations from both sides.

In statements after the meeting, Kadis said that they want to strengthen their ties, while examining synergies at EU level.  Kadis said that one of the key issues both countries face in the current period is the shaping of the new CAP  after 2020.

They also discussed about the enhancement of trade in agricultural products. Kadis said that exports of agricultural products from Cyprus to Lithuania have increased in recent years and the aim is to further strengthen the relations between the two countries in this area as well.

They also discussed  ways of developing collaboration in the field of agricultural research.

In his statements, Giedrius Surplys said that the funding of the CAP should remain at least at the same level, if not be increased, because, as he said, farmers face new challenges.

In addition, he said that during his visit to Cyprus, he would discuss the possibilities of strengthening his country’s trade relations with Cyprus, especially with regard to agricultural products, noting that Lithuanian exports to Cyprus amount to 5 million euro per year.

Regarding cooperation in the field of agricultural research, the Lithuanian Minister noted that with the achievements of Cyprus in this field and the strong agricultural university of Lithuania, there are prospects for enriching their cooperation also in the framework of the European programmes such as the Erasmus student exchange programme or the Horizon research programme.