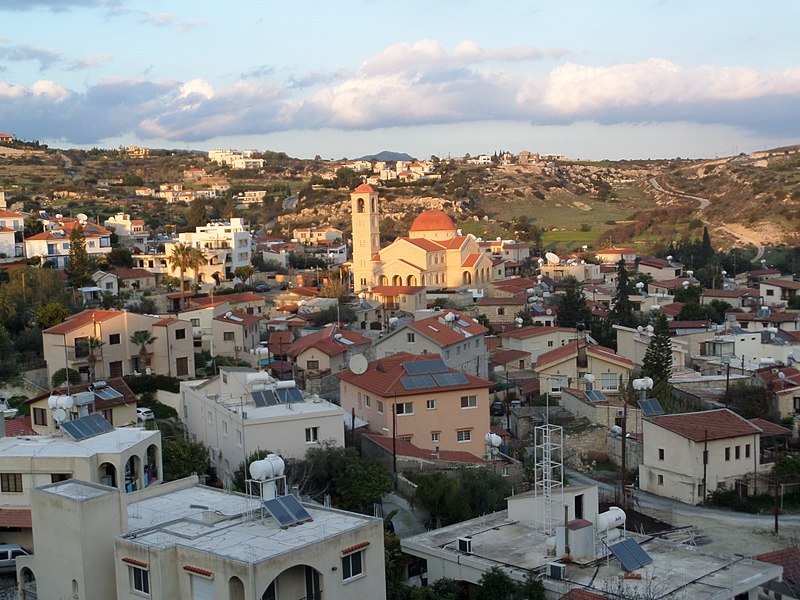 Agios Tychonas (Greek: Άγιος Τύχωνας) is a tourist village in the Limassol District of Cyprus, located east of Limassol. It borders with the villages of Moutagiaka, Pyrgos and Armenochori.

Within the village’s boundaries there are luxury hotels, tourist apartments, restaurants and taverns. 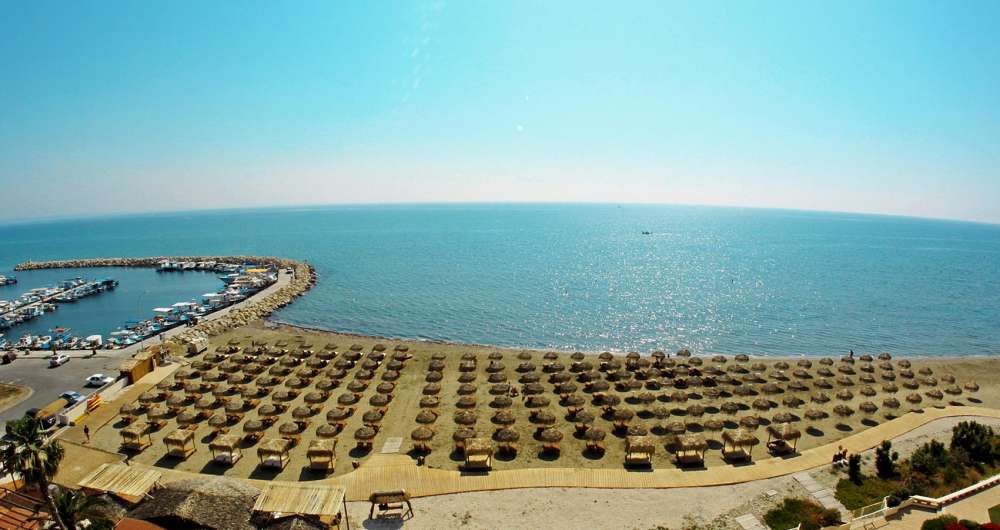 Beaches
The Beaches of Agios Tychonas are among the most beautiful in Cyprus. The clear sandy shores, clean blue sea and numerous other excellent facilities are enough incentive to attract thousands of locals, visitors and return tourists year after year to Agios Tychonas.

The beautiful image of the luxurious hotels and apartments along the coast form an impressive image of color and light.

Choose from a plethora of sea sports for all ages: waterskiing, sailing, paragliding, canoeing and jet skiing. Agios Tychonas also has the only Sailing Center in Cyprus, with european specifications.

No less than seven beaches in Agios Tychonas have been awarded with the EU blue flag for their level of cleanliness and the brilliant facilities offered in line with the uniform standards set by the European Union.

At Amathus, the centre for diving and underwater exploration offers an opportunity to experience the exhilaration of the deep. A diving school provides a range of lessons based on ability. Underwater visibility of more than 20 meters makes it possible to see more than two hundred species of fish and other marine life. The mysteries of the sea reveal ancient secrets including the ancient port of Amathus with its mostly submerged underwater columns.
For the less adventurous, or simply, in addition, want to keep in shape during their holidays, the Agios Tychonas hotels have fully equipped gyms with qualified trainers, tennis courts, squash and badminton courts, and not least, a special park where riding lessons are on offer.

The recently paved Agios Tychonas path along the coast, is an additional asset to the beauty of the landscape. For a magical six kilometer walk, begin at the Poseidonia hotel and walk eastward towards the small chapel of Ayia Varvara. Enjoy the mesmerizing view of the sea through the generous shade of the pine trees, hibiscus, and the scents of the many flowerbeds.

At the end of the path lies a park; a resting place and a nearby Recreational area that is popular with local children.

The Agios Tychonas seafront reflects the ever growing cosmopolitan character of the area and genuine Cyprus tradition.

Archaeological sites
In the long history of the island, the Agios Tychonas area has always been at the forefront of historical developments that proved decisive for the future course of the island. The witnesses of this role are the remnants of every era, from the ancient Greeks, to the Byzantines and the mediaeval age, most prominent in the area.
The city kingdom of Amathus is the core of this history and is situated on the sea front of Agios Tyhonas. Its name derives from Amathusa, the mother of the ancient King Kinyras of Paphos.

According to legend, the city was founded by one of Hercules’ sons.
Yet other legends talk of the beautiful Ariadne, daughter of the King of Crete, Minoas, who, after helping Theseus kill the Minotaur, they run away to Amathus where they married.

In a twist of the legend, Theseus abandoned Ariadne, who died at childbirth, after giving life to Stafylus and Oinopoios.

Her two sons cultivated the first vineyard and apparently set off the wine production and trade, that today is one of the most successful industries on the island. Cyprus is renowned throughout the world for its wines.

Excavations prove that people started settling in the Agios Tychonas area three thousand years ago. Built on the coastal hills with an amazing view to the sea, Amathus developed rapidly in ancient times, into one of the most prosperous kingdoms of Cyprus.

In the port which was built in the pre-Phoenician period, around 800 BC., trade with the peoples in the region flourished.

In the first century BC, a temple to goddess Aphrodite was built and the Adonis games were held each year. The sports included boar-hunting.
In the Roman times, Amathus became the capital of one of the four administrative districts of Cyprus, while in the fourth century AD, a diocese was established.

Around the end of the sixth century AD, St John the Merciful, founder of the Order of St John was born here.

The city prospered right through the Byzantine period, but by the time the Crusades King, Richard the Lion Heart reached its shores in 1191; Amathus was in a state of disintegration. Its treasures were plundered and stones from buildings of rare architectural value were carried off to build new settlements in Limassol.

In 1869, stones from Amathunta were used for the construction of the Suez Canal.

Excavations in the area began in 1980 and continue by teams of Cypriot and French archaeologists.

The Acropolis, the temple of Aphrodite, the Market, the city’s Walls, the Basilica and the Port has been brought to light by ongoing archaeological excavations.

On the coastal part of the ancient city, there are indications of an early Christian Basilica, while at the top of the hill; findings from the Hellenistic period were discovered.

The archaeological discoveries are on exhibit at the Nicosia and Limassol museums but also at The Metropolitan Museum of Art in New York.
One of the most valuable and most definitely the greatest treasure ever found in ancient Amathus, is the huge limestone jar that was taken away to the Louvre Museum in Paris.

The jar dates back to the sixth century BC. It measures one meter and eighty five centimeters in height and 2, 2 meters wide, it weighs almost one and a half tones.

Made out of a single stone, it has four handles decorated with the head of a bull. Both in terms of size and design, it is considered a unique treasure.
In 1962, the Marquee De Vogue, a renowned French academic, acquired the jar and three years later took it to the Louvre museum.

The greatest desire of the locals is the jar’s safe return to its rightful owners. 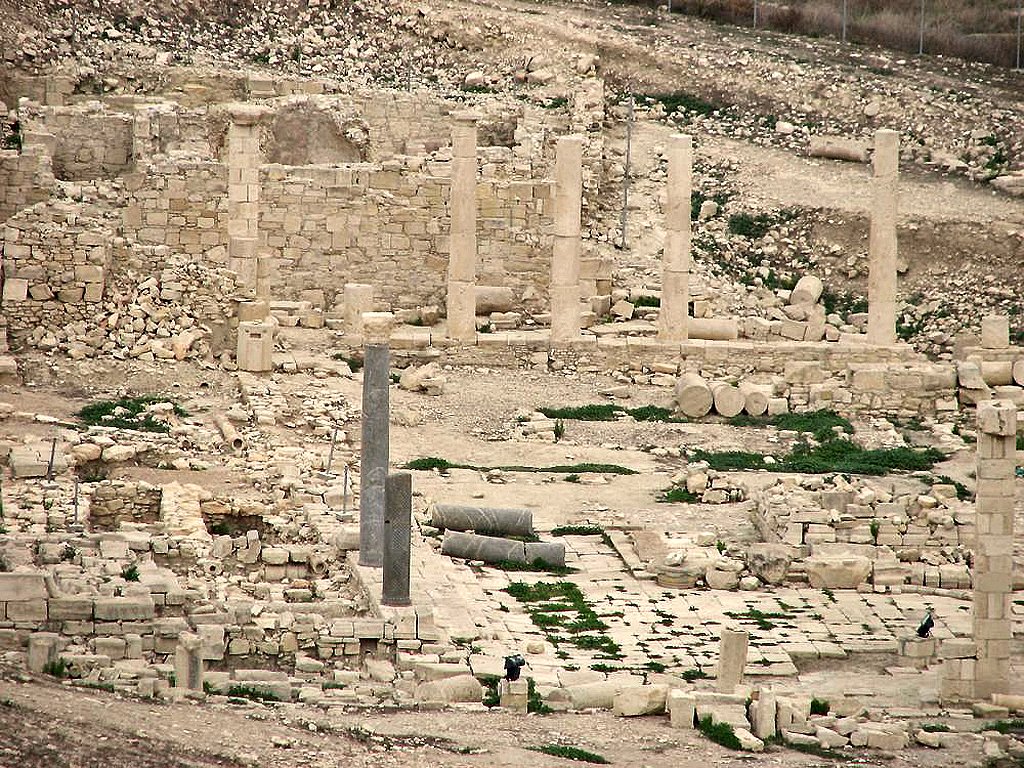 Courtesy of the Community Council of Agios Tychonas