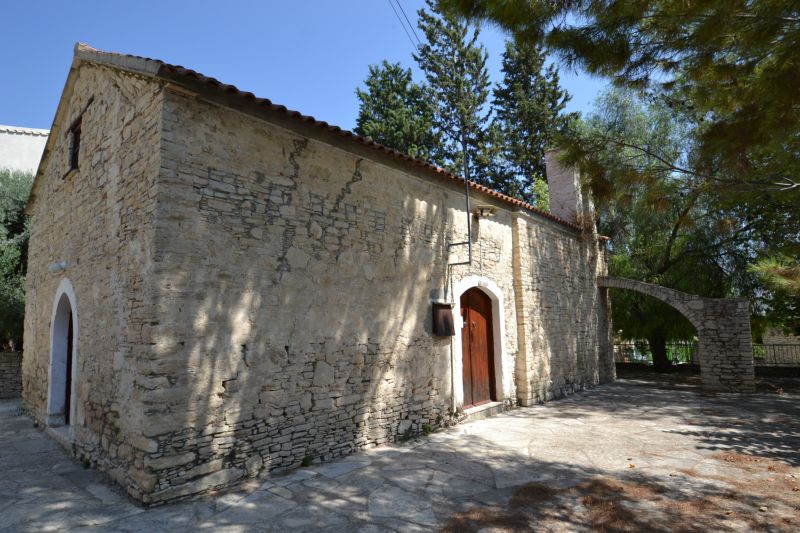 The naming Agkathiotis appeared, according to tradition, during the Turkish occupation, when almost all neighbouring villages had been occupied by the Turks while Agios Georgios remained free. The reason for this was that every time the invaders tried to approach the village they would come across wild thorny vegetation instead of the rich vegetation they could see from the village of Monagri located opposite Agios Georgios. As a result, they could not go through the thorns using the means at their disposal at the time and therefore had to go back without succeeding in conquering the village and that is how Agios Georgios was named Agkathiotis (thorny), that is in honour of the Saint who continues to protect the village up until today. 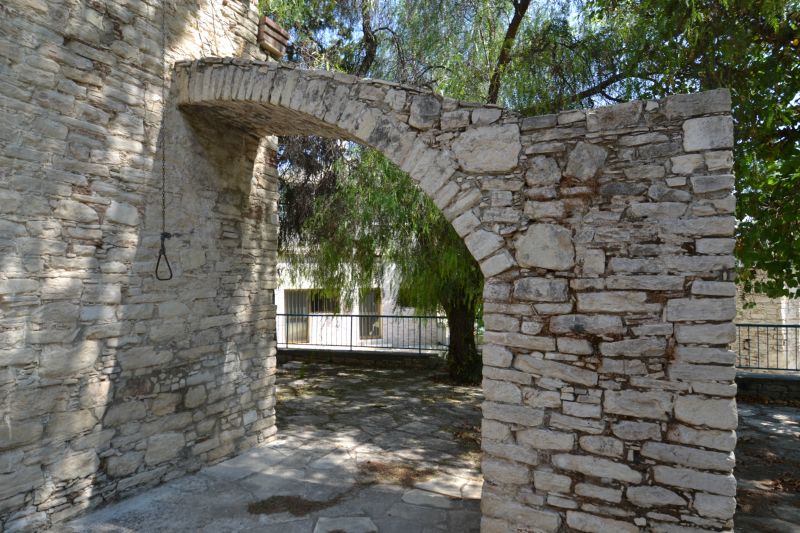 The village is built on the left side of the Kourris valley, on an altitude of 490 m above sea level and the area is covered by black and soultanina grape cultivations, as well as by grains, carob and almond trees.

According to tradition, during the Frankish occupation (1192-1570) there used to be a Frankish Kingdom at the location where the church of Panagia Syrkas stands today. The kingdom was ruled by Zografou with whom the great ruler Tsitsielklis from the neighbouring village of Monagri fell in love. On the southern side of the church there are still some remains of a wall which are probably parts of the walls which used to protect the aforementioned kingdom.

At the beginning of the 1800s, because of the drought that had struck the area of Pafos, Giorgkis, son of Marousa, a shepherd from Ais Giorkis Polemiou in Pafos took his wife and three children, loaded his donkeys with the necessary clothes, mattresses and cooking utensils and set off looking for a better place to stay along with their flock.

Upon reaching the river of Ezousa, he made a stop and was planning to stay there because the area was abundant in water for both humans and animals. However, after some minor conflicts he had with the locals whose interests were in jeopardy after the arrival and settlement of the shepherd in their area, he had to take his family and flock and move to another area. Moving on he reached Xeropotamos where he stayed for a few days. However, the locals once again chased him away. He fought back but it was hard to win so he had to pack his belongings and once again set off looking for new land.

As soon as they reached river Dkionisos (an area between Agios Georgios and Sylikou) he decided that it was the best area for them to settle as it had plenty of water and a lot of uncultivated pieces of land. They stayed there but once more the locals pressured and threatened them to leave. However, this time Giorkis was determined to stay there permanently. They built their farm and house just a few metres away from the river, in a place that offered both safety and coverage.

After a year, he went back to their old village Polemi alone and convinced his brother in law, Fesas, to move to the new place with his family and flock. So, the new families became two and together they faced the pressures and threats more easily.

They named the area where they were staying Agios Georgios, after the name of their village in Pafos. When their children had their own families they then built the church of Agios Georgios. This church stands in the centre of the village up until today and kept in it is the vestige of the Great Martyr Agios Georgios. (For further information regarding the churches and chapels of the village, visit the relevant page of our website). Descendants of these two families still live in the village today.

The residents of the community are well-known for their hospitality and their traditional homemade drinks of Commandaria and Zivania, as well as for their raisins and the traditional delicacy of “soutzoukos”. (Information on these traditional products can be found under the link Traditional Products).

Today, the community is experiencing a housing development by both locals and foreigners which is mainly due to the climate of the area and the short distance from the city of Lemesos.

Courtesy of the Community Council of Agios Georgios Silikou