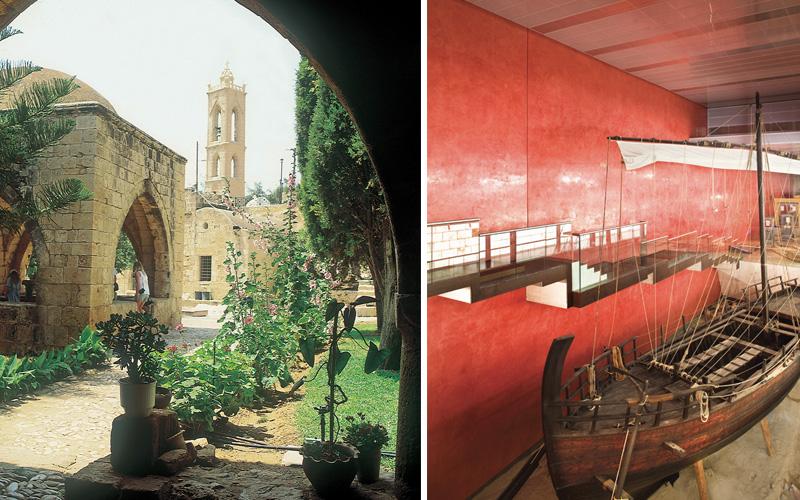 1. Agia Napa Monastery
This imposing medieval monastery, dedicated to “Our Lady of the Forests”, stands in the middle of Agia Napa surrounded by a high wall enclosure. Its 16th century church is partially underground, carved into the rock. An ancient sycamore tree, believed to be over 600 years old, grows in front of the south gate.
2. “Thalassa” Agia Napa Municipal Museum
The “Thalassa” Municipal Museum has a main principle to present to the audiences the impact and the significance of the sea upon the history of the island.The exhibits of the museum cover a chronological span, from the palaeontological to historic periods until present times. Among the exhibits are bones and skulls of Cypriot pygmy mammals, a 4th Century B.C. Greek trading vessel, the original of which was found off the coast of Kyreneia, Cypriot antiquities and stuffed marine life animals.
3. Agia Napa Aqueduct
The Agia Napa Aqueduct was originally a Roman structure, with Frankish alterations. Its main purpose was to deliver water from the boundaries water sources to the local monastey.
4. Makronisos Archaeological Site
The Makronisos archaeological site is a Hellenistic and Roman Period cemetery,which consists of 19 underground tombs. They are all provided with a rectangular trench in the middle, slightly lower than the floor and three benches at the slides of the chamber.