After a 36-year wait, Peru decides to enjoy itself 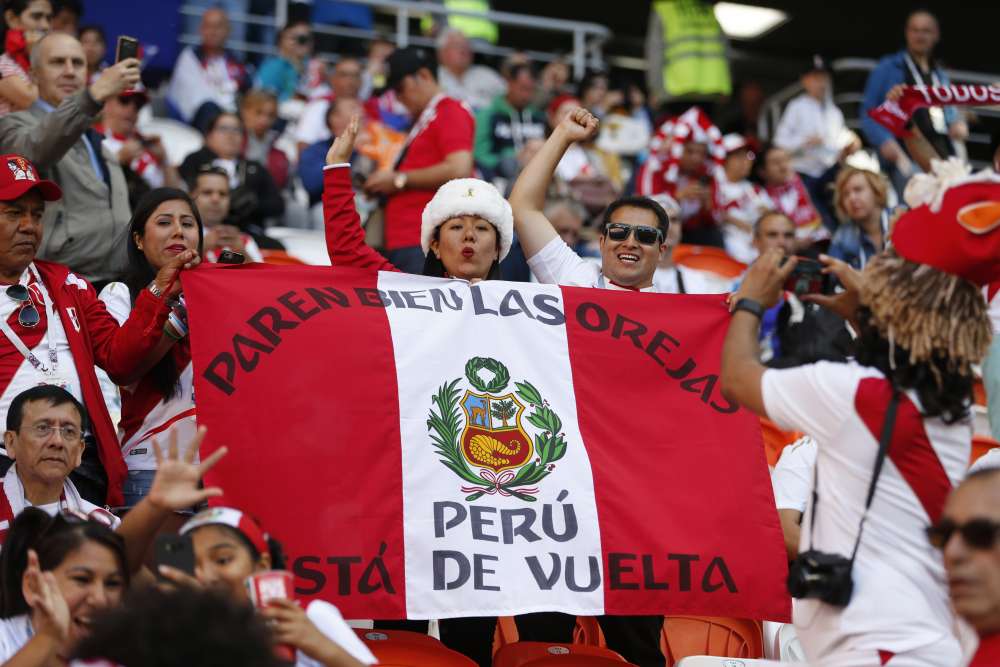 Augusto Caceres, 81, had all but given up hope of seeing his beloved Peru at a World Cup again during his lifetime. He has been to 13 straight World Cups, beginning with the 1970 tournament. And for much of that time, Peru had failed again and again to make it to soccer’s biggest showcase. Still, Caceres kept going, and hoping that Peru might somehow be a part of the World Cup for the first time since 1982. And now Peru is.

Dining in a restaurant here Friday, a day before Peru made its return to the World Cup in a frustrating 1-0 loss against Denmark on Saturday, Caceres spoke about his adventures, of the great players and the great teams he has seen over the years, and of Peru’s continued absence from it all.

“I went back home every year and they didn’t improve,” he said, recalling all the years of failure and of the Peruvian national teams that did play good soccer but had bad luck. “In soccer, you win by scoring goals, and when 10 years had passed by, I thought they will never make it.”

But they did, and now Caceres will have a lot of company. For after a 36-year wait, Peruvians are not taking any chances. Who knows how long it will be until the next World Cup opportunity arises. Better to take part in this one.

As a result, thousands upon thousands of fans from the Andean nation and the greater Peruvian diaspora have descended on Russia, with more arriving daily, giving Moscow’s Red Square the air of Lima’s own Plaza Mayor. Even at the World Cup opener Thursday, between host Russia and Saudi Arabia, Peru’s distinct uniform shirt — a white shirt with a red sash — was a regular presence among the throng. 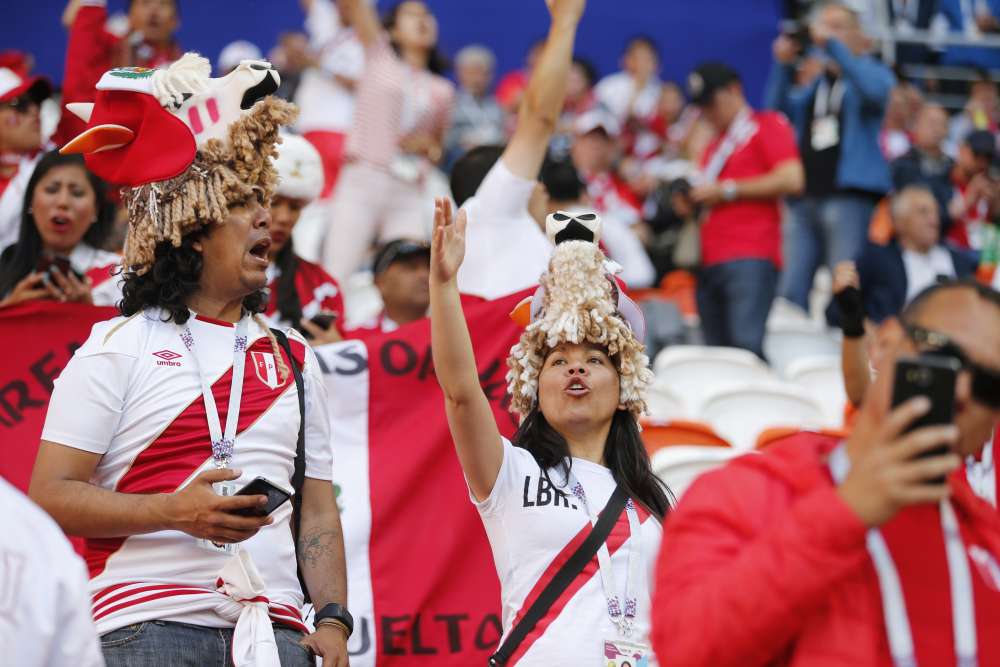 Francois Braendle, a Swiss banker based in Russia, said he hadn’t seen anything quite like the Peruvian invasion. “Honestly, I believe the whole country of Peru is here,” he said on Thursday. Behind him, in Moscow’s early evening sunshine, the red-and-white tide marched on toward Nikolskaya Street, a gathering point for fans from across the world, but another place where Peruvians now seem to outnumber the rest.

And before Saturday’s game, the streets of Saransk, the smallest of the World Cup host cities, were swamped by Peruvians, heralding chance meetings of friends and neighbors that usually take place an ocean away in places like Lima, Arequipa and Cusco.

“Everywhere you go you see someone you know,” said one fan, Balere Ortúzar. Her uncle Carlos Mariátegui said he had already bumped into 50 people from back home.

Peru’s presence in the World Cup was hanging in the balance until the very end of South America’s qualifying tournament, widely accepted to be the toughest in soccer. And had Brazil scored either one fewer goal in its 3-0 victory over Chile, or had Paraguay beaten last-place Venezuela at home (instead, it lost), Peru would have been shut out of the World Cup again.

But instead it was Peru that was handed a secondary route into the World Cup via a playoff game against New Zealand, and its 2-0 victory unleashed the sort of celebrations one might expect in a soccer-mad nation. A national holiday was declared, and travel agencies in Peru and FIFA’s ticketing website were swamped by people wanting to go to Russia. Officially, in its most recent update, FIFA said it allocated 43,583 tickets to Peruvians, but the real number might be considerably higher, since those supporting Peru in Russia this week seem to have come from anywhere and everywhere, including Australia, which Peru will meet in its final group game.

Being at the World Cup can be an expensive proposition. Caceres, who splits his time between a home in Connecticut and Lima, said he spent $2,000 securing resale tickets for Peru’s three group games, starting with its matchup with Denmark in Saransk on Saturday. He has committed to spending $20,000 in total.

Already, there are all sorts of tales of the lengths that Peruvians have gone to pay for their World Cup odyssey. At least some of those tales, no doubt, are true. There are the ones about remortgaging a home or selling a car. And there are the more exotic solutions, such as the one hatched by Diva Rivera, 24, who is an actress and the owner of a clothing store in the Amazon city of Iquitos. Rivera started a campaign called “donate 1 sol so I can go to the World Cup” and traveled across the country with a plan to gather 1 Peruvian sol, the equivalent of 30 cents, from each person she met.

“It was a challenge that came about from a kind of fever that arose when the team qualified for the tournament,” Rivera said in a telephone interview from Saransk after arriving by train for Peru’s game Saturday.

She was joined in Russia by a man who was said to have gained 25 kilograms (about 55 pounds) in three months to qualify for seats reserved for obese spectators after finding regular seats for Peru’s matches had been sold out.

In a strange twist, the man behind Peru’s renaissance, coach Ricardo Gareca, known as el Tigre, is partly responsible for the wait having been so long. In a World Cup qualification game in 1985, Peru was leading Gareca’s Argentina, 2-1, when, with the game entering its final stages, he poked the ball into the net to snatch a 2-2 draw and take away a place in the tournament from Peru.

It turned out to be a bittersweet moment for Gareca. When Argentina later announced its final squad for the 1986 World Cup in Mexico, Gareca was left off, and he has been waiting to be involved in the event ever since.

Now Gareca and a new generation of Peruvian players finally have their chance, and when they looked up into the stands Saturday, they were met by the sight of Peruvians just about everywhere.

The emotions attached to the game even seemed to overcome Peruvian midfielder Christian Cueva. Given a chance to score Peru’s first World Cup goal in four decades, Cueva skied a penalty shot over Denmark’s goal just before halftime. The miss proved costly when Denmark’s Yussuf Poulsen slotted what would be the only score of the game with 30 minutes left to play.

Denmark’s goal didn’t dampen the singing in the stands or Peru’s repeated efforts to find a tying goal, which ultimately came to nothing.

Age Hareide, Denmark’s coach, said his team almost buckled under the pressure created by Peru’s fans and players, and described the victory as a lucky one. Referring to the atmosphere, he said: “We were a little scared of it, and it did affect us.”

The Peru circus now moves to Yekaterinburg, where the frenzy will commence anew Thursday in a game against imposing France. Peru’s fans will be hoping their team will still be able to do something it has not managed since 1982: score a goal at the World Cup. And in the process, maybe even come up with a victory against the French or at least a tie. Having traveled all the way from Peru, why think small?

By In Cyprus
Previous articleSweden, after further review, top South Korea in World Cup
Next articleBelgium looks like a World Cup heavyweight against Panama