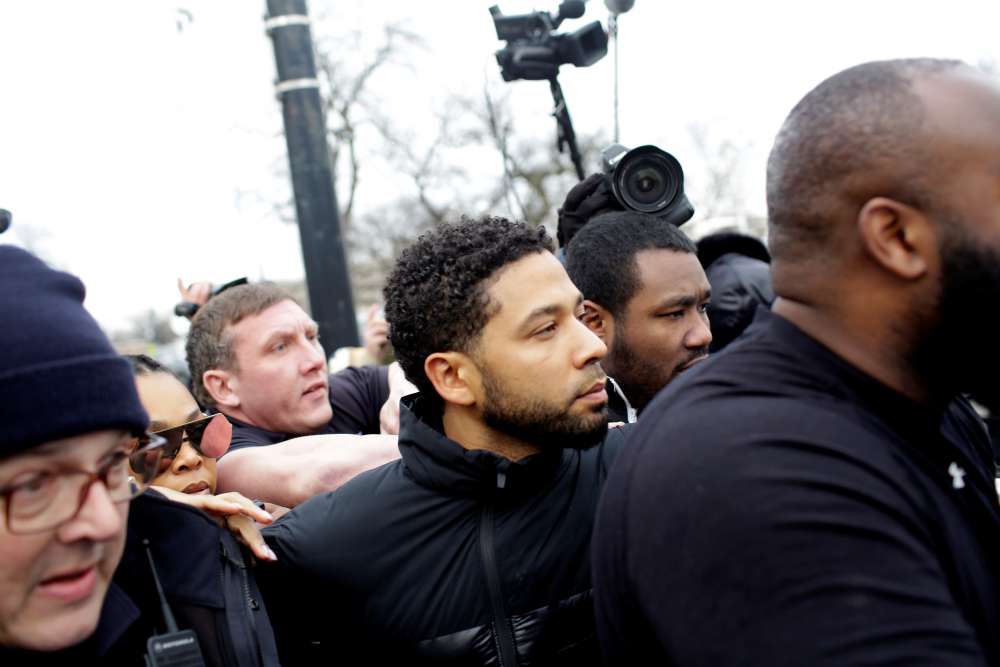 Television actor Jussie Smollett, arrested last month on a single charge of perpetrating a hate-crime hoax, has been newly indicted on 16 felony counts of falsely reporting to police that he was assaulted by two strangers shouting racist and homophobic slurs.

The indictment, returned by a Cook County grand jury on Thursday and made public on Friday, greatly expands on the legal jeopardy faced by Smollett, whose story of being attacked in Chicago by supporters of U.S. President Donald Trump has drawn suspicion since it first surfaced in late January.

Smollett, 36, who is black and openly gay and plays a gay musician on the Fox network hip-hop drama “Empire,” was charged last month in a single-count criminal complaint with making a false report to police, defined under Illinois law as a form of disorderly conduct.

Each count carries a maximum penalty of three years in prison and a $25,000 fine.

Smollett’s attorney, Mark Geragos, blasted the indictment in a statement as “redundant and vindictive,” adding that his client “adamantly maintains his innocence even if law enforcement has robbed him of that presumption.”

He also said that leveling charges in an indictment spares prosecutors the need to submit evidence and witnesses to defense cross-examination in a preliminary hearing, where a judge decides if sufficient cause exists for the case to proceed to trial.

At the time he was initially charged two weeks ago, Chicago Police Superintendent Eddie Johnson said Smollett had paid two brothers $35,000 to stage an assault on him in a hoax orchestrated to somehow further his acting career.

Smollett has remained free on $100,000 bond since his release hours after surrendering to authorities on Feb. 21. He already was scheduled to return to court on March 14. In the meantime, there is no warrant for his arrest in connection with this week’s indictment “because it’s the same case,” Chicago police spokesman Anthony Guglielmi told Reuters.

No mention is made in the indictment of Smollett’s claim, according to police, that his attackers yelled, “This is MAGA country,” referring to Trump’s “Make America Great Again” slogan, as they accosted him.

But the 16-page document includes other elements of the account that Smollett had stood by for weeks.

According to previous police recitations of Smollett’s story, he reported that two masked men approached him on the street in the early hours of Jan. 29 shouting racial and homophobic slurs, struck him in the face, doused him with an “unknown chemical substance” and wrapped a rope around his neck before they fled.

News of the assault spread quickly on social media, with many expressing outrage while others wondered whether the story was fabricated even as Chicago police insisted their detectives were treating the matter seriously.

In an interview with ABC’s “Good Morning America” days before he was charged, Smollett said he was angry that some people questioned his story, and he suggested the disbelief might come from racial bias.

His attorneys said after his arrest on Feb. 21 they were conducting a thorough investigation for purposes of mounting the actor’s defense.

Smollett himself, according to reports in media citing unnamed sources, apologized last month to the cast and crew on the set of “Empire” but maintained his innocence.

The release of the indictment came after the Chicago Police Department said it started an internal investigation into how information about the alleged hate crime against Smollett was anonymously leaked to reporters.

Geragos said the indictment was designed, in part, “to distract from the internal investigation.”

“Empire” debuted on Fox in 2015 and has earned multiple Emmy nominations. Smollett plays the character Jamal Lyon, a member of the family that is the focus of the drama. Producers said in February they were removing his character from the final two episodes of the show’s current season.