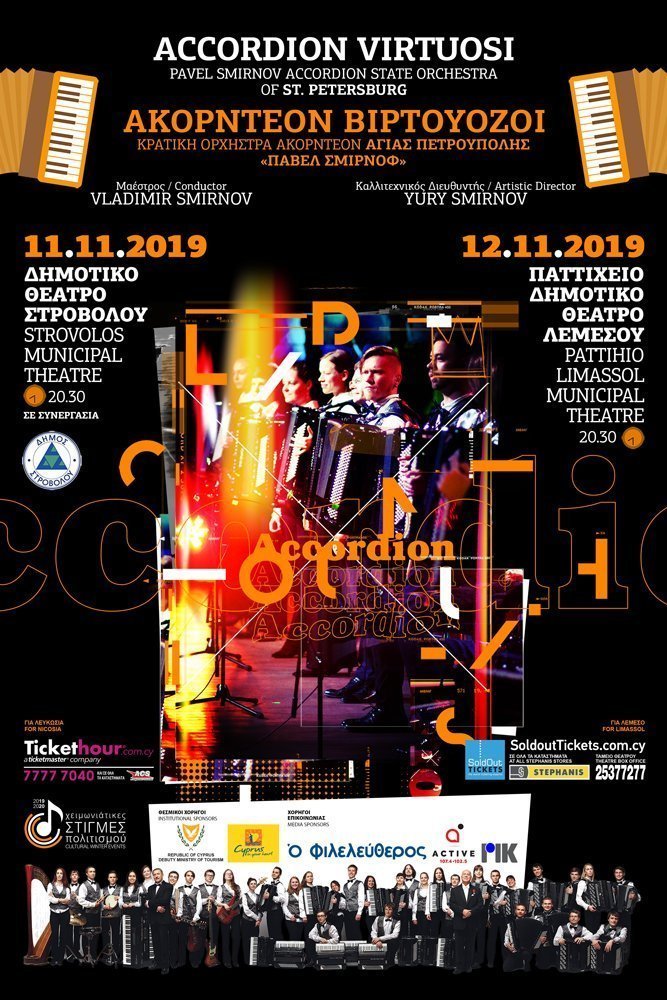 The famous Accordion Ensemble from St. Petersburg belongs to international first-class orchestras. With its outstanding soloists it presents a thrilling musical firework of classic, rock and folk-music. In the metropole of bajan – and accordion virtuosi – today known as St. Petersburg – the orchestra was founded in 1943 by Pavel Ivanovitsch Smirnov. The tradition of conductors is continued in the 3rd generation by his sons professors Yury and Vladimir Smirnov and by his grandson Yaroslav. As an orchestra of superlatives it has received numerous international prices and is honored as such. It is not a coincidence that Russian president’s continue to fortify its exceptional position. For example it was declared as Russian representative for the Olympic Games and as an official symbol of Russian culture. Many notable composers, among them Dimitry Shostakovich and Aram Kachaturjan, acknowledge its extraordinary quality and play an important role in supporting and promoting the orchestra. For each concert the conductors are inspired by the musical message of the Russian soul and choose the appropriate pieces spontaneously. The orchestra carries off with its endless possibilities of expressional sound into a musical dream – into an unforgettable musical experience. For the great enjoyment of symphonic sonority, wide dynamic spectrum and virtuoso brilliance without sensing frontiers of its musical capacity the orchestra always reaps storms of enthusiasm.

***The 22nd Logicom Cyprus Marathon initially scheduled for March 15 has been cancelled due to the latest Coronavirus measures announced by the council of...
Read more
Whats On

***The opening of the exhibition "Rebirth" initially scheduled for March 14 has been postponed until further notice due to the latest Coronavirus measures announced...
Read more
Outdoor Adventures

Cyprus is a paradise for those who love nature and walking. The Deputy Ministry of Tourism and the Forestry Department are organising the Walking...
Read more
Whats On

The Baltic Trio invites you to a concert for clarinet, cello and piano at Technopolis 20 in Paphos, on Tuesday, 10th of March 2020,...
Read more