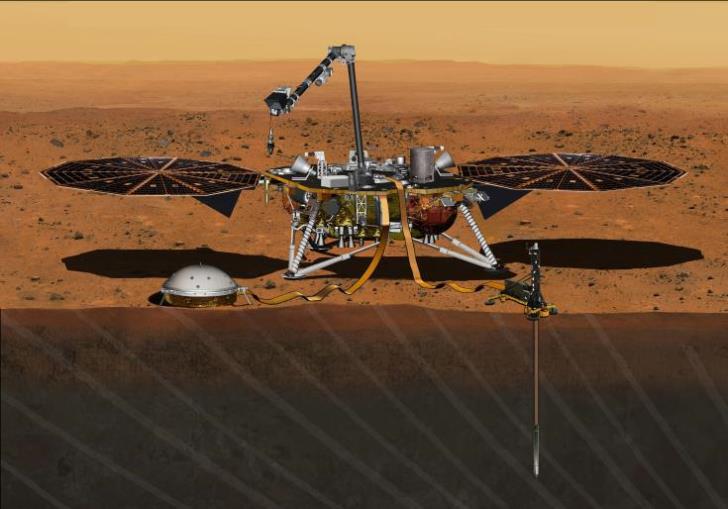 NASA’s InSight mission is due to touch down on Mars on Monday.

Short for Interior Exploration using Seismic Investigations, Geodesy and Heat Transport, InSight is a robotic lander that is set to examine the interior of the planet. It will touch down in a region known as Elysium Plantia.

It carries a suite of instruments – many of them from Europe – to try to determine the rocky world’s internal structure.

Signals from the probe confirming its safe touchdown should be received at 19:53 GMT, give or take a minute.

It can take up to 20 minutes for the spacecraft’s signals to reach Earth, leaving mission planners in limbo to find out if everything went according to plan. Unable to intervene, they rely on a perfect symphony of pre-programmed tasks, robotic devices and controlled explosions.

Once InSight successfully lands – if it survives the perilous entry – it must be properly aligned with the sun to keep producing power and charging its batteries.

As with previous surface missions, InSight must survive the “seven minutes of terror” – the time it takes for a probe entering Mars’ thin atmosphere at hypersonic speed to slow to walking pace and gently put itself on the ground.

Many have tried; most have failed. “As humanity, as explorers – we’re batting at less than 50%,” said Nasa’s science chief, Thomas Zurbuchen. “Going to Mars is really, really hard.”

Other interplanetary probes might carry a commemorative plaque or maybe a coin, however, InSight will have a microchip inscribed with the names of 2,429,807 names submitted by the public, who were provided with downloadable “boarding passes” for the mission complete with “flight miles.”

According to CNA, 983 names of Cypriots are included in the microchip.

Space enthusiasts who signed up this last round shared their downloadable “boarding passes” on social media, complete with the total number of flight miles they’ve collected by participating in engagement initiatives for other Mars missions.

I was the 1,350,497th passenger to hitch a ride! Mars or Bust! Happy Landings, Insight! #Mars pic.twitter.com/PYzF84hoUu

InSight is the first dedicated to unlocking secrets from deep below the Martian surface. The lander will spend 24 months – about one Martian year – using seismic monitoring and underground drilling to gather clues on how Mars formed and, by extension, the origins of Earth and other rocky planets of the inner solar system more than 4 billion years ago.

“What this helps us understand is how we got to here,” said JPL’s Bruce Banerdt, InSight principal investigator, during a pre-landing briefing with reporters last week.

While Earth’s tectonics and other forces have erased most evidence of its early history, much of Mars – about one-third the size of Earth – is believed to have remained largely static over the eons, creating a geologic time machine for scientists.

InSight’s primary instrument is a highly sensitive French-built seismometer, designed to detect the slightest vibrations from “marsquakes” and meteor impacts.

Scientists expect to see a dozen to 100 marsquakes over the course of the mission, producing data to help them deduce the size, density and composition of the planet.

The Viking probes of the mid-1970s were equipped with seismometers, but they were bolted atop the landers, a design that proved largely ineffective.

InSight also is fitted with a German-made drill to burrow as much as 16 feet (5 meters) underground, pulling behind it a rope-like thermal probe to measure heat.

Meanwhile, a radio transmitter will send signals back to Earth, tracking Mars‘ subtle rotational wobble to reveal the size of the planet’s core and possibly whether it remains molten.

The InSight and next rover mission, along with others in the planning stage, are seen as precursors for eventual human exploration of Mars, NASA officials said.

The 360 kg InSight marks the 21st U.S.-launched Martian exploration including the Mariner fly-by missions of the 1960s. Nearly two dozen other Mars missions have been sent from other nations.