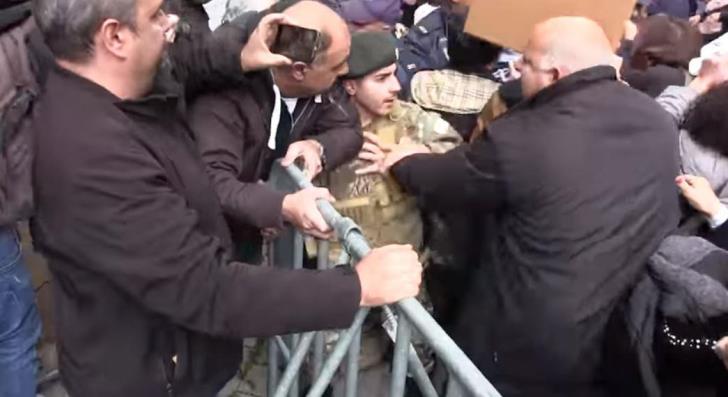 A 55 year old man arrested after scuffles at Ledra Street checkpoint during Saturday’s protests against the government’s decision to close four checkpoints as part of measures to prevent a coronavirus outbreak, will stand trial for assault, unlawful assembly and creating a disturbance.

After a two remand order expired on Tuesday the man was taken to Nicosia district court where the case was submitted and he was freed. The trial was set for April 9.

The man has reportedly admitted to pushing the soldier and apologised, but denied assaulting him.

He was among dozens who pushed aside barricades erected at the Ledra Street checkpoint following a government decision to close four checkpoints for a week to prevent an outbreak of coronavirus.

Police said that investigations into the case are continuing.

A spokesman said that police are also examining a video showing a police officer hitting a demonstrator, but noted that no complaint had been filed.

Organisations which participated in Saturday’s protest had asked for the suspect’s immediate release, saying that a single moment of tension was being used to demonise an entire peace movement.

They argue that the coronavirus is being used as a pretext to hamper contact between the two communities and have asked for the checkpoints to be reopened.

The government counters that this is a public health issue and there are no underlying political motives.

By In Cyprus
Previous article4,000 tons of seaweed cleared by Larnaca Municipality in past two months
Next articlePaphos participates in innovative sustainable tourism consortium