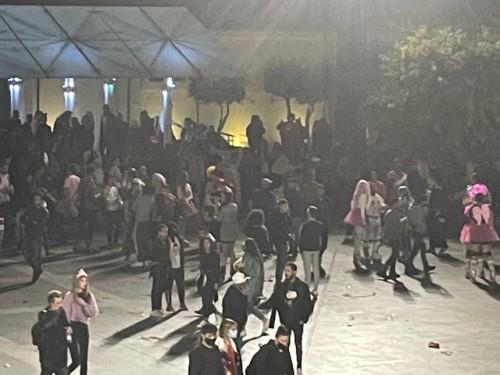 Police have fined 40 citizens and two businesses so far for violating Covid measures at a Carnival celebration in Limassol Old Port on Sunday evening, according to a police announcement on Monday.

A police spokesman said that the owners of one of the two booked businesses failed to comply to police instructions, leading to the Chief of Police instructing members of the force to serve the business with a notice of prohibition of the operation of the premises.

Local media reported that the party ended at 9 pm on Sunday with the start of the curfew.

On Sunday afternoon Limassolians took to the streets in their cars dressed in costumes and drove along the same route that the Carnival parade would normally follow prior to the pandemic, while police monitored the situation.

Later, large crowds started forming at the Old Port area, many reported interacting at close distances and without masks on.

Members of police soon arrived at the scene to encourage participants to adhere to measures.

In response to the incident, Justice Minister Emily Yiolitis took to televised media on Sunday night to appeal to citizens and parents.

“I am addressing citizens and parents who are watching these images. What we are seeing is worrying. Police showed tolerance in the afternoon but these images are beyond reason.

“I want everyone to realise that the situation is at its limits. I hope that what happened will not affect our epidemiological situation,” Yiolitis said.

Limassol mayor Nicos Nicolaides denounced the incident via Twitter and said that what happened represents only a fraction of Limassol residents.

“Today’s events in no way represent the vast majority of Limassolians. I am saddened and disappointed at this behaviour,” Nicolaides said.