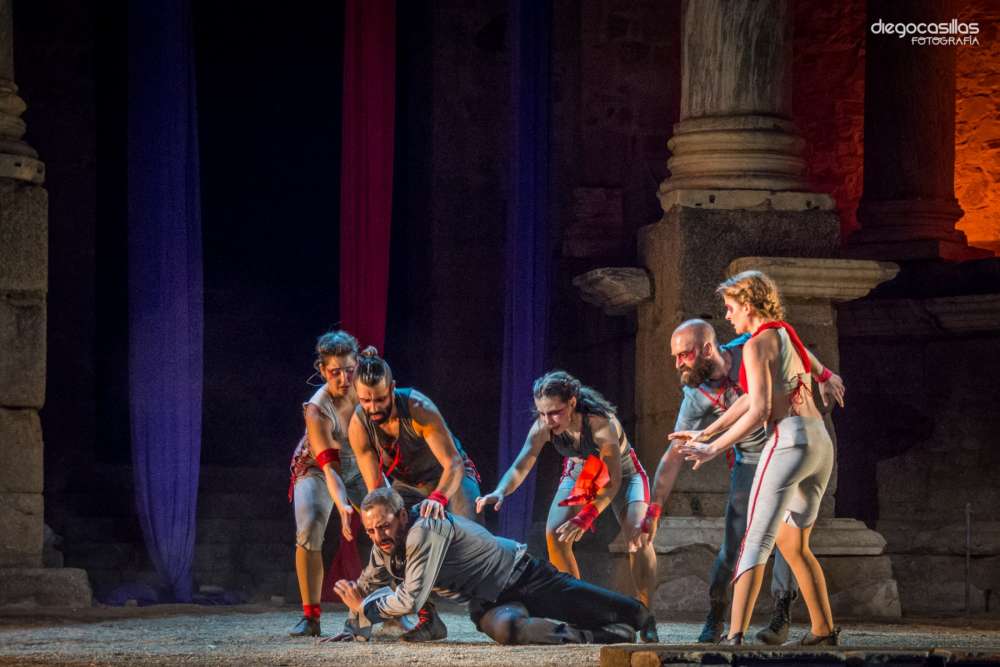 International and national theatre productions compose this year’s programme of the “International Festival of Ancient Greek Drama”, co-organised by the Cultural Services of the Ministry of Education and Culture, the Cyprus Centre of the International Theatre Institute and the Deputy Ministry of Tourism.

Emphasising on the quality and collaboration with major theatre institutions, and encouraging -for yet another year- local creation, a diverse and expansive programme is offered to the spectators, locals and foreigners, with performances of contemporary aesthetic and artistic approach to ancient drama, highlighting the range and prestige of the Festival inside and outside the borders.

In the twenty-third edition of the “International Festival of Ancient Greek Drama”, five theatre groups present performances of ancient Greek drama at Paphos Ancient Odeon, Curium Ancient Theatre and “Skali” Amphitheatre in Aglantzia, from the 28th of June until the 27th of July 2019.

The five productions for this year’s edition

The official opening of this year’s edition will take place at Paphos Ancient Odeon on the 28th of June 2019 with the first Slovenian production of Euripides’ tragedy Trojan Women, produced by the Slovene National Theatre Nova Gorica and directed by Jaša Koceli, while a performance of the production will follow on June 30th at “Skali” Amphitheatre. The universally timeless anti-war tragedy, with the exceptional direction of Jaša Koceli and Marjuta Slamič in the role of Hecuba, gathered rave reviews from the Slovenian press and audience, giving Marjuta Slamič the Tantadruj award as a distinction for her performance (season 2017/2018).

The Festival’s programme continues with the Spanish production Hippolytus by Euripides directed by Emilio del Valle, a co-production of Maltravieso Teatro, La Almena Producciones and the Mérida International Classical Theatre Festival, which will be presented at Paphos Ancient Odeon on July 8th and at “Skali” Amphitheatre on July 10th. Hippolytus, which was presented last summer at the 64th Mérida Festival and received great praise, attempts to recompose the first tragedy written by Euripides, Hippolytus Veiled based on the surviving Hippolytus Garland- Bearer.

The National Institute of Ancient Drama (Fondazione INDA) of the Syracuse Greek Theatre Festival in Italy, returns after 5 years to the Festival presenting Aristophanes’ comedy Lysistrata directed by Tullio Solenghi, for two performances at Curium Ancient Theatre on July 12th and 13th. The distinguished and renowned actor Tullio Solenghi directs Lysistrata, with Elisabetta Pozzi in the leading role in a production of superb cast and collaborators.

The internationally award-winning Izumi Ashizawa collaborates with Cypriot theatre company Belacqua Theatre and directs Euripides’ Bacchae, the Cypriot production of this year’s Festival which will be presented at “Skali” Amphitheatre on July 18th, at Curium Ancient Theatre on July 20th and at Paphos Ancient Odeon on July 22nd. The intercultural production combining the techniques of Japanese Noh theatre and ancient Greek drama, aims to create a new performance language.

The production of the National Theatre of Northern Greece (NTNG), Iphigenia in Aulis by Euripides, directed by Yannis Kalavrianos marks the closing of this year’s Festival programme, with performances at Curium Ancient Theatre on July 26th and 27th. In a new translation by Pantelis Boukalas and with Anthi Efstratiadou, the 2016 recipient of the “Melina Mercouri Theatre Award” in the role of Iphigenia, Iphigenia in Aulis is this year’s NTNG production, participating also at the Athens & Epidaurus Festival.

For another year, the aim of the organisers, is the continuation of the rising and successful course that the “International Festival of Ancient Greek Drama” already has on its record, the artistic quality assurance of the performances’ programme, the substantial contribution to the international and local cultural landscape and an approach towards all audience genres.

Furthermore, a desire of the organisers has always been the greatest possible attendance of Cypriot and foreign audience, that will result in the upgrade and cultivation of theatrical education, as well as the promotion of cultural tourism, through the provision of surtitles in English for all the Greek-language productions and in both Greek and English for the foreign-language productions.

Each year the “International Festival of Ancient Greek Drama” reaches the broad strata of our society by developing and expanding further. Moreover, the Festival contributes to the international and local cultural landscape, opening up constructive dialogues with other countries. The successful course and expansion of the institution have been reinforced by the vast increase in audience over the last five years, as well as by the grand of the European recognition EFFE Label (2015-2016, 2017-2018 and 2019-2020), as one of Europe’s finest festivals, enhancing its establishment in an international range and motivating the Festival’s organisers towards its continuation and evolution.

THE TROJAN WOMEN by Euripides

IPHIGENIA IN AULIS by Euripides

*Spectators attending performances at Curium Ancient Theatre are advised to arrive at the theatre at least 45 minutes before the performance.

€45 Festival pass (per person for attending all five performances)

€10 group sales (over 10 persons per performance) at [email protected]

Free admission, upon reservation of free pass at tel. 7000 2414 (at least five days prior performance), to:

□ STEPHANIS stores in all cities

□ TIME OUT Kiosk in Paphos

□ In N Out Kiosk in Paralimni

To facilitate the public in Nicosia, shuttle transport from Nicosia to Curium Ancient Theatre will be provided, for the following performances:

Lysistrata by Aristophanes (Fondazione INDA, Italy) on July 12 and 13

Iphigenia in Aulis by Euripides (NTNG) on July 26 and 27

Ιt is necessary to purchase your bus ticket along with the performance ticket, 15 days prior, due to a fixed number of buses.

▪ Departure: 18:30 (from the parking opposite the Handicraft Centre in Athalassa Avenue)

By In Cyprus
Previous articleStelios Foundation to aid next of kin of murder victims
Next articleEU leaders gather in Brussels to agree on nominations, EU’s strategic agenda