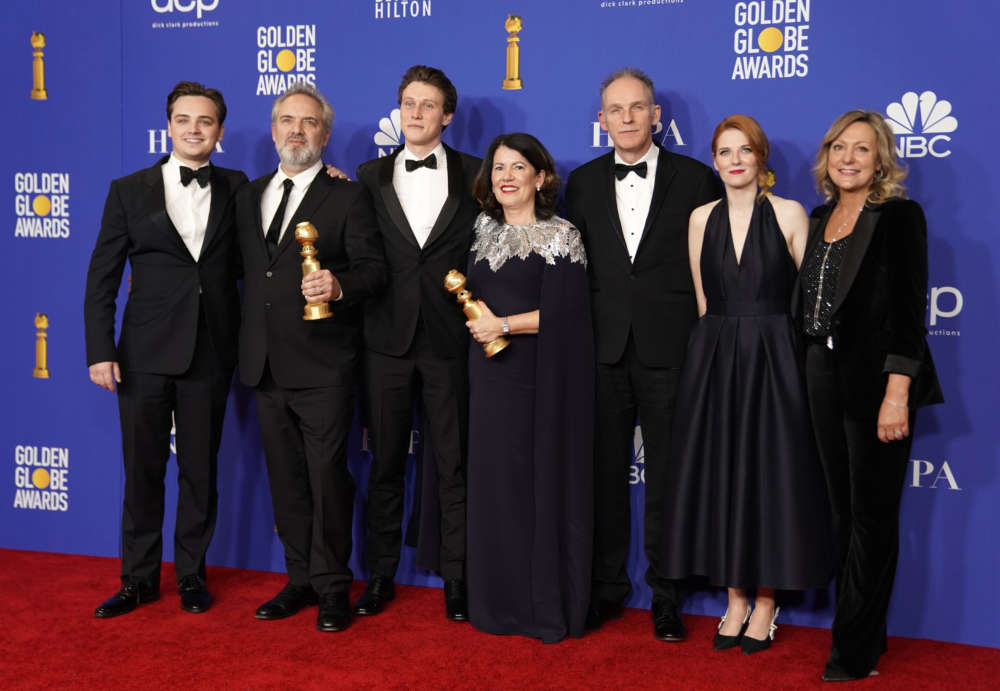 World War One movie “1917” and “Once Upon a Time in Hollywood,” set in 1960s Tinseltown, won the top movie prizes at the Golden Globes on Sunday on a night packed with upsets and hot-button issues at the start of Hollywood’s awards season.

“1917” was named best drama and took best director, beating presumed front-runners “The Irishman” and “Marriage Story,” both from Netflix Inc. The nostalgic “Once Upon a Time in Hollywood” from Sony Pictures won for best comedy/ musical, and had the biggest Golden Globe haul, with three awards.

Martin Scorsese’s high-profile and costly gangster epic for Netflix went home empty-handed on a disappointing night for the streaming service that could affect its Oscar chances in February.

Apple Inc’s new Apple TV+ streaming service, in its first award show, failed to make good on any of its three nominations for “The Morning Show.”

British director Sam Mendes was named best director for his immersive “1917” from Universal Pictures, a dark horse with no big names that arrived in U.S. movie theaters only 10 days ago.

“That is a big surprise,” said a stunned Mendes. “I really hope this means people will turn up and see it.”

Joaquin Phoenix, who played a terrifying “Joker,” and Renee Zellweger, who portrayed Judy Garland in “Judy,” took the drama movie actor honours. Taron Egerton (“Rocketman”) and Awkwafina (“The Farewell”) were first-time winners in the comedy/musical field.

“We all know there is no … competition between us,” Phoenix told his fellow nominees, praising their “beautiful, mesmerizing work.”

Tarantino won for the screenplay of his love letter to the industry, “Once Upon a Time in Hollywood,” while Brad Pitt was a popular winner for playing a laid-back stunt double in the film.

“I wanted to bring my mom,” quipped Pitt. “But any women I stand next to, they say I am dating.”

British comedian and actor Ricky Gervais, hosting the awards ceremony for a fifth time, threw caution to the wind with expletives and jabs about the dominance of streaming platforms, diversity and Hollywood’s sexual misconduct scandal, which drew mostly nervous laughter in the room of A-list celebrities.

Gervais noted that the room was packed with entertainment executives. “They are all terrified of Ronan Farrow. He’s coming for you,” he said, referring to the American journalist whose reports helped uncover the sexual misconduct scandal that has swept Hollywood over the past two years.

Gervais was not the only celebrity at the boozy dinner to get political.

She said she had built a career of her choosing and “wouldn’t have been able to do this without employing a woman’s right to choose. To choose when to have my children and with whom.”

Others, including absent winner Russell Crowe, for television series “The Loudest Voice,” spoke of the devastating bushfires in Australia and the dangers of global warming.