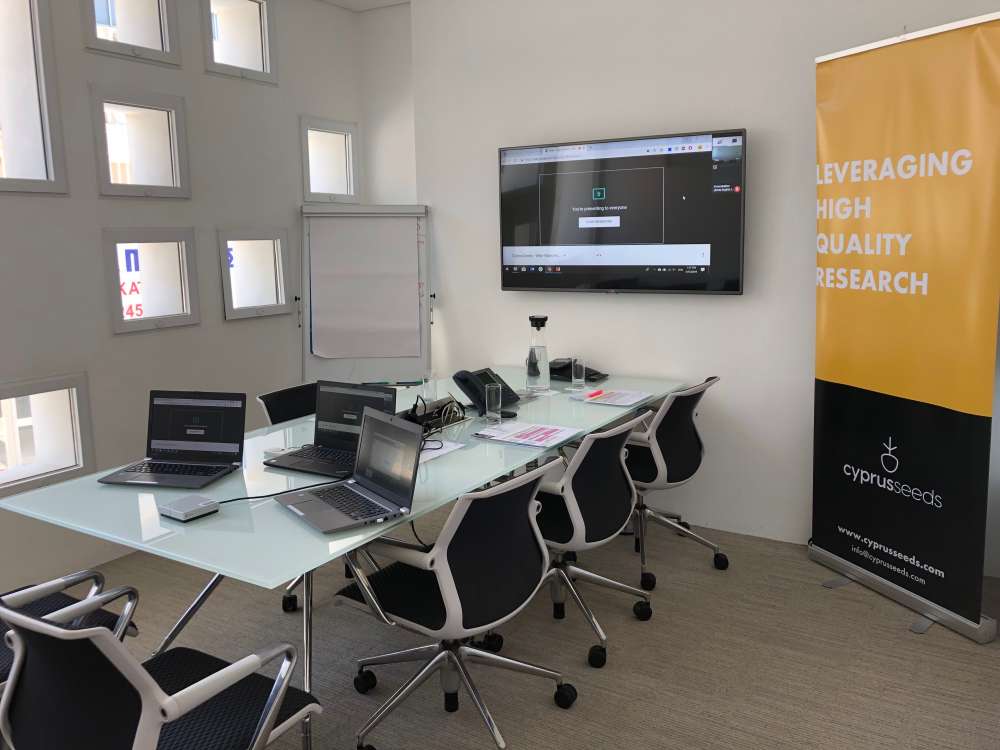 Cyprus Seeds has completed the second phase of the evaluation process, namely the Web-Video Interviews with the 16 projects which were short listed on the basis of the written applications.

The interviews with the 16 research projects that scored high in their written applications were invited for interviews with a committee of seven experienced evaluators from the USA, between Monday and Friday, May 13 and 17.  EY Cyprus, one of the programme’s initial donors and supporters hosted the Web-Video Interviews.

Cyprus Seeds invited the 16 projects to remote interviews with a number of international evaluators, comprising of successful entrepreneurs, individuals who commercialised their own research and investors in technology start – ups. Each of the 16 research teams were asked to give a seven-minute presentation on their project, followed by a Q&A session.

In her remarks, Maria Georgiadou, Managing Director of Cyprus Seeds, highlighted that Cyprus Seeds will be finishing the evaluation process, which started in April in less than one month ago and will be announcing the first Grantees of the Cyprus Seeds program at the end of May.

Also, Georgiadou announced that on June 12, Cyprus Seeds will bring to Cyprus Marina Hatsopoulos, Director of Levitronix Technologies and investor in start-ups in Greece and in the USA, to celebrate the commencement of the first 12M Funding cycle of the Cyprus Seeds Programme and to introduce the Grantees.

Cyprus Seeds is a non-profit organisation set-up in Cyprus, in July 2018, with the mission to help commercialise innovative academic research taking place in the universities and research institutions in Cyprus, by providing seed funding, in the forms of grants, mentoring, business skills training and networking.

The main sources of funding to Cyprus Seeds are donations. The initial donors are The Hellenic Initiative (THI), The A.G. Leventis Foundation, private corporations in Cyprus, including Eurobank and EY Cyprus, and individuals in Cyprus and abroad, including George David, Cypriot entrepreneur and philanthropist.

For the implementation of its programme, Cyprus Seeds has partnered with the MIT Enterprise Forum Greece (MITEF Greece). MITEF Greece, the Greek chapter of the global MIT Enterprise Forum, is a non-for-profit organisation affiliated with MIT which offers one of the most successful accelerator programmes for start-ups in Greece, as well as an annual competition for start-ups.