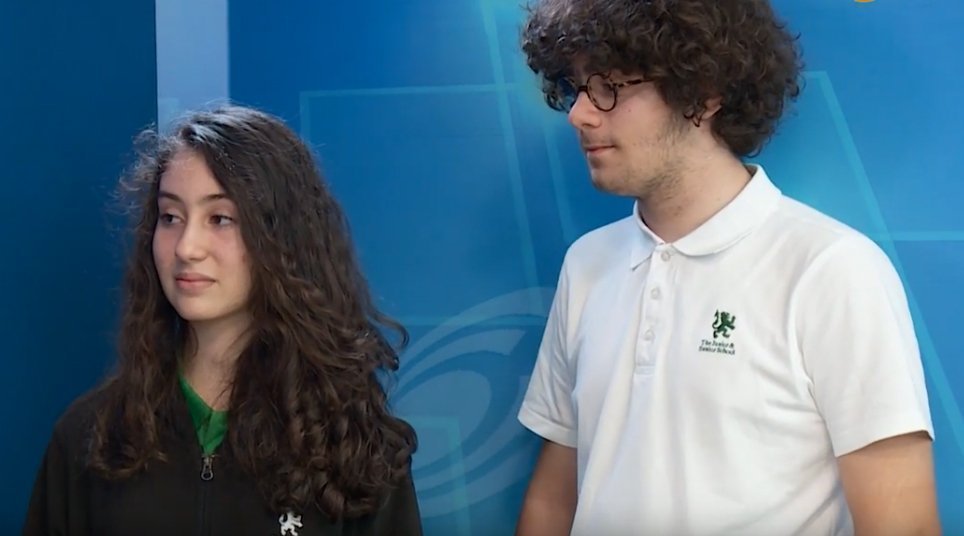 The ideas put forward by two 14 year-old pupils from Cyprus on how to colonize the moon will be useful to NASA and other organizations such as the Moon Village Association, as humanity is getting ready to return to the moon, build a colony and then head for Mars.

Athena Vourgos and Savvas Agisilaou from Senior School in Nicosia won first prize in a competition/challenge brought exclusively to Cyprus by NASA for Cypriot teams. Around ten teams participated in the Cyprus challenge that took place in the framework of the NASA SpaceApps Challenge, which was organized in many cities around the world including Nicosia last weekend. The competition in Nicosia was held in the presence of NASA Chief scientist Dr James Green, who mentored the Cypriot teams.

Apart from the international challenges offered by NASA to all cities in the world, an exclusive challenge was given only to Cyprus which no other country had. This special challenge which the Cypriot teams had to solve was about space colonization.

Participating teams had to prepare and present a project which included listing the contributing members of the base, defining a list of requirements for countries to contribute to such a project, deciding how many people from each country or state should participate, identifying the structure of a leadership and governance for the colony(ies) and designing a social structure.

The teams had one weekend to think about their project and ten minutes to present it before the judges, two from the Cyprus Space Exploration Organization and one from NASA.

The prize of the winning team is an invitation by NASA to visit the Marshall Space Flight Center in the US and train like astronauts do before they go into space.

The two Cypriot students, together with George Danos, President of the Cyprus Space Exploration Organization (CSEO) that brings the NASA SpaceApps Challenge to Cyprus for the past five years, spoke to CNA about the exclusive Cyprus challenge offered only to the Cypriot teams.

Danos told CNA that recent first prize awards won by Cypriot teams at the International section of the NASA Space Apps Challenge caught the attention of NASA. Danos and the NASA judge, who connected with Nicosia through a live link for the Cyprus challenge, are the co-chairmen of the Moon Village & Exploration Analogues working group of the Moon Village Association.

«In this working group of the Moon Village Association some sociology questions were raised. We decided to offer an exclusive for Cyprus challenge this year since Cyprus has proven its capabilities, and ask our youth to tell us how to improve humanity through a moon base and make a fresh start that would be a positive step,” he said.

Danos, who was one of the judges of the Cyprus challenge, told CNA that the judges, including the judge who linked live from NASA, thought that the proposal put forward by the two 14 year-old pupils was very thorough and deserved the first prize.

Noting that all ideas presented before the judges by the Cypriot teams (around ten teams participated) were indeed unique, he said that they will be sent to the competent bodies, including the Moon Village Association, in order to contribute to the work on how to establish a space colony, not only from the technological/scientific perspective but also from the sociological and humanitarian aspect.

Invited to comment on the significance of the Cyprus challenge, Danos said that many people recognize the negative aspects of human existence and life on Earth, such as famine, wars, air pollution, and wonder why moon colonies should be established and transfer all those problems there.

It is very important, he went on to say, to ask the new generation how they imagine humanity making a fresh start on the moon, using a model for a more optimistic future.

Speaking to CNA, Athena Vourgos said that the main question of their winning project was how to structure a colony on the moon so they set off to answer a basic question: ‘who owns the moon?’

In that organization, she explained, there are many suborganizations, like the assembly, the court of justice and the international economic committee which will be in charge of all the licenses of people who want to go outside the Earth and mine minerals to bring back.

Savvas Agisilaou said that they described how the moon will become colonized by using as an example the ISS and the way the UN functions, in order to design the structure of the leadership.

“We also designed a method of selecting the people who will colonize the moon,” he added.

Asked about the significance of the NASA award, Savvas said that he is very happy to have had the opportunity to compete, adding that it is an honour for him to be invited by NASA to visit the Marshall Space Flight Center where astronauts train.

Athena said that the award could give her an opportunity to work one day in the future with astronauts.

When she was younger, she said, she had plans for her studies but she never thought about space, until today.  She initially thought of following studies like neuropsychology and then continue with psychoanalysis, but after the NASA competition she feels she has the opportunity to use her knowledge and work with NASA astronauts.

Cyprus, in just five years, has managed to win two first global prizes and a second prize at the International stage of this hackathon. The Cypriot winning teams had the honour to be invited by NASA to the Kennedy Space Center at Cape Canaveral.

The Cyprus News Agency was the media sponsor of the event.