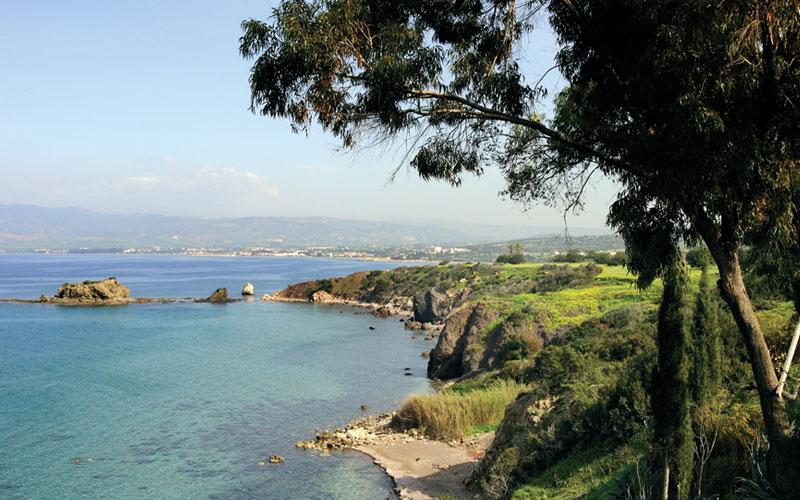 Starts: 400m before the Baths of Aphrodite
Length: 7.5km
Estimated duration: 3 – 4 hours
Difficulty rate: 3
Points of interest: This trail offers beautiful views of Polis Chrysochous, the Paphos Forest and the Akamas peninsula. The path runs past Pyrgos tis Rigainas (Queen’s Tower) and connects with the Smigies trail at Kefalovrysia, where there’s a fountain of non-potable water, and with the Aphrodite trail at Pyrgo tis Rigainas. Another point worth mentioning is a 500-year-old oak tree, which is located near the ruins of the tower. To return full circle, the trail follows the main road that connects the Baths of Aphrodite with Polis for about 400 metres. At the starting point of the trail you can visit the Botanical Gardens of Akamas. It is part of the E4 European walking route.
Endemic plants: Shrub rush (Bosea cypria), Shrubby knapweed (Ptilostemon chamaepeuce var, cyprius), ‘Valoti’ – Integrifolia (Ballota integrifolia), Marjoram (Origanum majorana var. tenuifolium), Dwarf shrub (Onosma fruticosum), Cyprus sage (Phlomis cypria var. occidentalis).
Fauna: The main species of fauna found in the area are:
Mammals: Fox, hare, hedgehog
Birds: Wood pigeon, partridge, Cyprus warbler (endemic), Cyprus wheatear (endemic). The forest of Akamas serves as a resting point for many migratory birds
Reptiles: Cyprus viper, Cyprus lizard, Black whip Snake